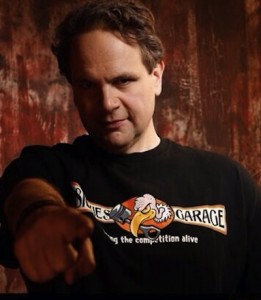 Hey, all you Rocklahoma-bound people. Got something for you here:

Let’s suppose Ace Frehley had gotten a KISS-off and you helped revive his career.

Let’s suppose the band members in Twisted Sister gave each other the stink-eye for 14 years, but you talked them into reuniting for a post-9/11 benefit. It was a nifty bit of matchmaking considering that Dee Snider and the boys are still together.

Let’s suppose Axl Rose strolled into your radio studio to chill and chat for a couple of hours. The surprise visit from the Guns N’ Roses frontman came during a time when it might have been easier to land an interview with Howard Hughes.

If you had done one of those things — just one — then, dude, you did something. Can we get a cigarette-lighter salute?

But if you were responsible for all of the above (and we’ve only scratched the surface), you would, like Robert Downey Jr., be among the cooler guys in metal.

And that’s interesting because the person who did all those things was admittedly uncool.

The subject came up during a phone interview with Eddie Trunk, who hosts That Metal Show on VH1 Classic and who will again host Rocklahoma during the Memorial Day weekend music fest in Pryor.

When Trunk was growing up in New Jersey and he was of the age to be influenced, hard rock and metal pushed his buttons like nothing else. Why? He doesn’t quite know the answer, but …

“When I was a kid, I was a little bit of a guy that lived on the fringes, if you will,” he said.

“That’s kind of a common trait when it comes to this genre of music. I wasn’t in the ‘in’ crowd. I wasn’t with the cool kids. I wasn’t the guy who was always invited to the parties. I was just a little bit of an outcast at times. I just found something in this genre of music that made me feel included and got me excited and interested in it and it made me want to fight for it.”

In that way, Trunk is the Uncle Sam for “his” type of music. Uncle Eddie wants you to join him in the same way that he once joined the KISS army.

Pre-enlistment, Trunk said he was very much into pop music as a kid. Then, thanks to the AM radio in his parents’ car, he was introduced to the Raspberries.

“They had these really crushing sort of power chords over this great melody,” Trunk said. “I remember it like it was yesterday. My hair stood up. I was like ‘Wow, what is that?’ I went out and bought the first kind of ‘real’ rock record that wasn’t the Partridge Family or something and it was the Raspberries.”

Who knew Raspberries could be a gateway drug? About a year later, when Trunk was in junior high, he discovered KISS.

Trunk became the kid in the Twisted Sister video. What do you want to do with your life? I Wanna Rock.

Music, he said, was the only thing he cared about. He said he was “horrible” in school and his grades reflected that.

“It wasn’t that I wasn’t smart,” he said. “It was just that, unless it was something that I had an interest in, I just didn’t apply myself.”

If all a kid wants to do is listen to music, there’s a good chance someone is going to tell that kid he’s never going to amount to anything. Trunk said his parents were fairly supportive, but they were also concerned. They should have been. Following a siren’s call doesn’t always end well.

Lil’ Eddie was urged to get a backup plan. Did he got one?

“Not really,” he said, laughing. “I didn’t know what I would have ended up doing if this didn’t work out. I felt pretty confident though that I would work in some area of the music business, even if it was just something like managing a record store or something, as long as it was around music. I knew that, OK, it might not work out that I would ever get on the radio or get on TV, but at least I could do something around music.”

He took a job with a record label (Megaforce) and was VP by age 25. Then came more radio (his track record suggests he will ditch a playlist to suit his tastes) and a partnership with VH1 Classic.

Now Trunk is synonymous with the music that he loves, and he is so appreciated that rock royalty attended when Judas Priest played a private concert in his honor in 2008. “That Metal Show” launched the same year. Watch the show and you can tell (A) Trunk and his co-hosts could run-rule you in metal trivia and (B) the respect between hosts and guests is mutual.

“I have been doing this so long (that) I have a certain level of trust and connection with these artists,” Trunk said, adding that artists often do interviews where the person asking questions isn’t knowledgeable about their body of work.

“And I think that, with me, they know that’s not going to be the case. I think, on the flip side of that, though, that can hurt me at times because they also know I’m going to ask some questions or go in some areas they may not want to deal with. But, to me, that’s important and that needs to be done from time to time. It’s a little bit of a two-edged sword.”

What if this “hairy” tale had a different ending?

Would Trunk be content with, for instance, managing a record store? His response: Sure.

“However it played out, there was no master plan,” he said. “It’s funny because there are a lot of people that get into music or they get into radio because they want to try to be famous or they want their voice to be heard or they think they are going to make a lot of money or whatever the case may be. That was never the driver for me. The driver for me was just, OK, it’s another outlet for me to be able to share the music I love with other people. That’s all it was ever about. The fact that I was able to parlay it into more and stay in it for so long has certainly been great, and I am thankful for that,”

Hey, Eddie. Hopefully this doesn’t tarnish your rep, but many people consider you one of the cool kids now.