DORO PESCH DISCUSSES PUTTING OUT SPECIAL RELEASES THROUGH HER OWN LABEL 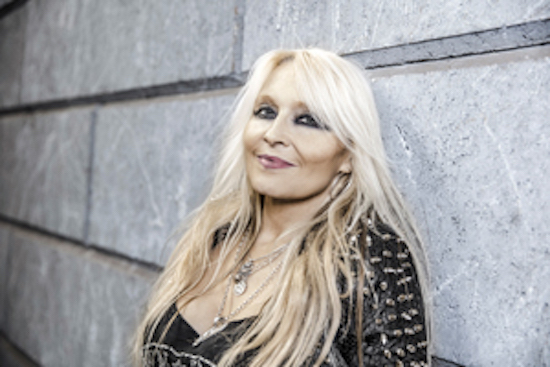 Ruben Mosqueda of KNAC.com spoke with Doro Pesch (Warlock, Doro), highlights from the interview appear below.

KNAC.com: It wasn’t that long ago that I was speaking with you about your last collection Magic Diamonds. Give [and explanation for] those that might have missed it the first time around.

Doro Pesch: Yeah, the feedback from the fans on Magic Diamonds was great. Last year when we found out that we couldn’t tour because of the Coronavirus…we had so many festivals and shows lined-up. Everything got moved or canceled. I thought, “Oh man, what should I do? I need to work on a new album”. So, I was in the studio doing just that. During that time, I thought it would be a good time to go through my archives and maybe put out a new ‘best of’ album, just for kicks. I thought I would select my favorite 15 songs, either re-record them or select some nice live versions of them. As I was doing this, the list grew from 15 to 25 then 35 songs. In the end, we ended up with 56 songs. [laughs] We decided to put them out as Magic Diamonds-The Best of Rock and Rare Treasures. The fans like hearing rarities and rare live recordings, so we gave it to them. Yeah, so we put that out in November. On that record the was a live version of Make Time for Love from the Triumph and Agony record. It was recorded in Spain, because it was one of the appearances where we performed Triumph and Agony in its entirety. So, when I heard that song, I was like, “Wow! That needs to make it on the Magic Diamonds record.” That is how it started, I knew we needed to put something out for the anniversary of Triumph and Agony. I went back and listened to all of the live recordings we did of the Triumph and Agony album, from Graspop and Sweden Rock and the North American tour. The Sweden Rock Festival was the first time we performed the album in its entirety. The magic was great, the fans’ response was great and the sound was great, it was just top-notch. I think that because of the virus, it allowed me the time to put this and Magic Diamonds out. If we were touring like we had initially hoped, I don’t think we would have released these special releases…

KNAC.com: The Triumph and Agony Live album, like Magic Diamonds, will be issued on your own Rare Diamonds?

Doro Pesch: Yes, I love old school stuff. I like vinyl, so I can put out these special packages on vinyl. I have some special box sets that I’m releasing for Triumph and Agony Live for some of the diehards. We have this very cool figurine that is a recreation of the album artwork. You put that in your house next to your KISS dolls. [laughs] I just saw the prototype. It looks great. It’s all hand painted. I told the lady that makes them, I said, “The warlock needs to look more mean and I need more make-up”. We even made a life size cardboard standup of the album cover. One of the fans on my Facebook page said she wanted one to put up on her window or on her front door. Can you imagine that? No one will come to the door uninvited. So, we’ll put this out, then the new album, which is ready, will be put out by Nuclear Blast.

KNAC.com: So for clarification, your label Rare Diamonds, will be to release special products, and new music, will be through Nuclear Blast, is that right?

Doro Pesch: Yes. That is right. I formed my own label because I got the rights back to some of my old records, which include Calling the Wild and Classic Diamonds. People can’t buy them anymore because they are not available. I want to put them out myself. So, we formed Rare Diamonds. When we put these albums out we will make them more special and we’ll put some special packages, box sets, double vinyl or four times vinyl! I think there are some metal heads that would really like that. I love that stuff too. [laughs] I love vinyl, I think it sounds better. It has more soul and more feeling.

KNAC.com: I love Calling The Wild, it’s an underrated record. I’ve not asked you this before. How did you decide to include a cover of Billy Idol’s White Wedding on the album and are you aware if Billy has heard your version?

Doro Pesch: I don’t know if he has ever heard it. I know at one time we had the same bookkeeper. [laughs] I was living in Manhattan and she was living there too. She retired so there was an opportunity to play that for him. [laughs] I would like for him to listen to it and I would like to hear what he thinks of it. I liked the song and we tried it out for the album. It just had this magic that fit the whole album. I have great memories of Calling the Wild, it has two duets on it and it was also my first time singing a song with  Lemmy [Kilmister]. It was Alone Again. Lemmy wrote it on acoustic guitar. I remember the first time he played that for me in the hotel room. I can tell you that the song moved me to tears. I said we need to record that for the album. We went to the studio and Bob Kulick recorded it. Bob produced the album and played on it too. Lemmy played on it too. He played some beautiful acoustic guitar on it. Then we also recorded the Motörhead classic Love Me Forever. I think that album has some many great moments on it. Thank you for mentioning it.

KNAC.com: I was aware that Cozy Powell was on A Touch of Evil, but you’re saying he was on other songs on the album as well?

Doro Pesch: Yeah, he plays more on the record but he was credited on A Touch of Evil.

KNAC.com Was this truly live, this performance, or did you have to go back and touch up some things?

Doro Pesch: We cleaned up a couple of things, like some noise from a cable, some feedback, but that was it. This is a live album with not much cleaning up, just some little touch ups. There weren’t any microphones in the audience. They sounded great so I insisted that we bring the volume of the audience up. It took us about six months to get this sounding like we wanted it. It was tricky, but it was worth it.

‹ MÖTLEY CRÜE’S NIKKI SIXX SAYS DAVID LEE ROTH WAS ASKED TO BE ON “THE STADIUM TOUR” AND DECLINED, STATING, “I DON’T OPEN FOR BANDS THAT I INFLUENCED”