DID YOU KNOW EDDIE VAN HALEN HAD A PATENT? WELL, HE DID… 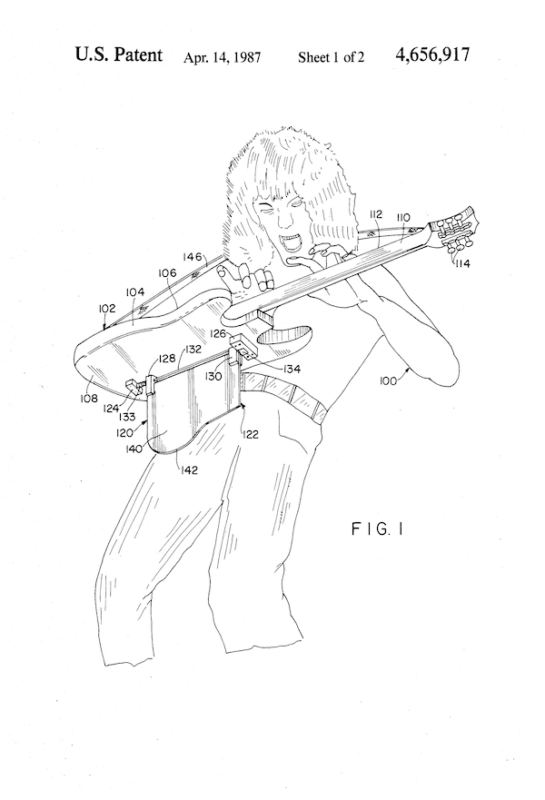 Eddie Van Halen was a guitar legend who even had a US patent to prove it — submitting what just might be the coolest diagram ever to the federal government to explain his device, reports The New York Post.

The famous rocker, who died of throat cancer Tuesday, was granted US Patent. No. 4656917 in 1985 for what he called a “musical instrument support’’ — a device that allowed him to free up both hands for “tapping’’ the strings.

“The device, when in its operational position, has a plate which rests upon the player’s leg leaving both hands free to explore the musical instrument as never before,’’ the patent said.

The guitar “rest’’ was designed to attach to the back of the instrument, which would then also be held in place with the help of the musician’s neck strap, according to a drawing submitted with the patent.

“Because the musical instrument is arranged perpendicular to the player’s body, the player has maximum visibility of the instrument’s entire playing surface,’’ Van Halen’s patent said.

Eddie’s submission included a black and white diagram apparently of the rock-and-roll star — complete with his classic shaggy hair and intense playing face — as well as numbers and arrows pointing to various parts of the device.

“Many more eloquent than me will discuss his musical achievements, so I’ll just note that he was owner and inventor of the patent with the baddest-ass diagram in the history of the U.S. Patent & Trademark Office,’’ Twitter user Timothy Burke wrote after the news of Van Halen’s death broke.

[Dana’s note: Eddie may have been known as a master guitar player, but he also resembled a musical mad scientist, who was always tinkering with his instruments, and gear, to get a desired sound. His innovation eventually led to his own line of instruments and gear, used by both esteemed professional players and hobbyists alike.]