DEF LEPPARD FRONTMAN JOE ELLIOTT SAYS “WE LIKE THE BEATLES, THE STONES, SLADE, SWEET AND T. REX. WE DIDN’T JUST GROW UP ON BLACK SABBATH” 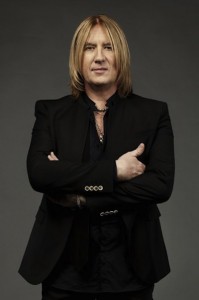 RS: How has the summer tour been going?

JE: Very good, thank you. Ticket sales have been insane. We’ve been doing some really outrageous numbers. Birmingham, Alabama, was 18,000 people. Dallas was 20,000. So it’s been a great tour. But it’s also been a hot one — it was 122 in the shade in Austin. When you’re onstage under the lights and in full regalia, and there’s audience members passing out just from watching you, it makes you wonder how you get through. Fortunately, we love playing.

RS: Let’s Go, the lead track on Def Leppard as well as the first single, is clearly about that love for playing. You sing, “Welcome to the party/Welcome to the edge of your seat.”

JE: It’s a call to arms, you know? Rick Savage wrote 80 percent of the song. I wrote the verses, he wrote all the music and the choruses. He came in with it, and we knew it was a classic Def Leppard song. It’s that three-minute pop-rock stuff with big chunky guitars and a big chorus. And it has that swaggering, mid-tempo rhythm, like Sugar, and Rock of Ages. The idea was, we wanted something familiar. I mean, when AC/DC comes back after years away, you’re not going to get Bohemian Rhapsody from ’em, you know? And you don’t want it, either — you want Back in Black, or something like it. For us, this is what we do. And it’s something we enjoy doing.

RS: That said, there’s also a lot of variety on the album.

JE: It’s got everything from Bowie to Queen to Zeppelin to, well, Def Leppard. And, yeah, Let’s Go could be the long-lost cousin of Sugar. And Dangerous sounds a little like Photograph. We know that. We’re aware of it. But that’s only part of the picture. There’s 14 tracks, and there are things like Invincible, which kind of sounds like a cross between Billy Idol and the Psychedelic Furs. We don’t shy away from an idea because it’s not in our typical bandwidth.

The thing is, we’ve never been a straight-ahead metal band that’s gonna sound like Megadeth or Metallica or something like that. We’ve just got too much melody in our heads. We like too much variety. We like the acoustic guitar. We like the keyboard. We like the Mellotron. We like the Beatles and the Stones. We like Slade and Sweet and T. Rex. We didn’t just grow up on Black Sabbath.

RS: There’s a story about how when Mutt Lange was producing Hysteria, he made a comment early on in the recording process that he wanted to create something that could have the same type of crossover appeal as, and also the broad success of, Michael Jackson’s Thriller. Do you recall that?

JE: I didn’t have the actual conversation, but, yeah, the guys were talking about the fact that Mutt did say, “I see no reason why a white rock band can’t do what Michael Jackson did.” And we probably looked at him like he had three heads!

RS: Do you feel fortunate that Def Leppard came up in a different era?

JE: I’m so glad we were who we were, when we were. The Eighties are mocked by everyone in the media, mostly for mullets and stupid shell suits and that kind of stuff. But there was more to the decade than meets the eye. And maybe in time, people will look at it the way they look at the Sixties and Seventies.

The fact is, it was the golden age. We had MTV. If you had a decent song, everybody knew it within five minutes, all over the country. And whether it was me leaping off the drum riser in slow motion wearing the Union Jack, or ZZ Top’s cars and furry, spinning guitars, or Simon Le Bon sitting on the front of that yacht, you just don’t forget those things. For that generation, it’s burned into the DNA. I don’t see the same thing in the next generation, with bands like Alice in Chains and Pearl Jam. And it dissipates even more the further along you go. And, sure, artists are still doing those things, but now everything’s insular. People are watching on their laptop with their headphones on. There’s no commonality.

To listen to Def Leppard’s new song, Let’s Go, and to read the interview in its entirety, please visit Rolling Stone.

‹ METALLICA AND BUDWEISER TEAM UP

ACCORDING TO THE RIAA, KISS HAS EARNED MORE GOLD ALBUMS THAN ANY OTHER BAND IN AMERICA ›