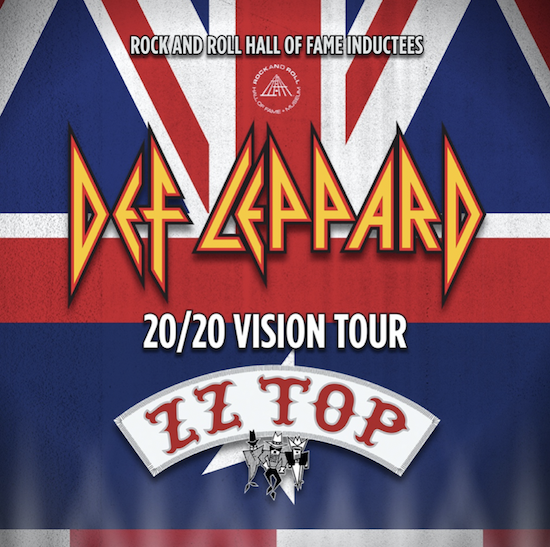 Def Leppard front man Joe Elliott says of the tour, “What a year this is going to be. First, sold out stadiums, then we get to go on tour with the mighty ZZ Top. Having been an admirer of the band for a lifetime it’s gonna be a real pleasure to finally do some shows together…maybe some of us will get to go for a spin with Billy in one of those fancy cars …”

“We’re excited about hitting the road with Def Leppard this fall; we’ve been fans of theirs since forever,” says the aforementioned Billy F Gibbons.  “We’ve been at this for 50 years now and the forthcoming run with them underscores that the good times are really just beginning.”  He adds, “Joe Elliott is always welcome to ride ‘shotgun’ with us and we won’t even ask him to pay for the gas.”

With more than 100 million albums sold worldwide, the 2019 Rock & Roll Hall of Fame® inductees with two prestigious Diamond Awards in the U.S., Def Leppard-Joe Elliott(vocals),Phil Collen (guitar), Rick “Sav” Savage (bass),Vivian Campbell (guitar)and Rick Allen(drums) – are one of the most important forces in rock music. The band have amassed a staggering 2.5 billion streams since releasing their music digitally only one year ago. As they did with the original release of their records, Def Leppard dominated the worldwide charts again. Chart stats saw their albums charting in the iTunes Top 10 in more than 30 countries, including Hysteria at #3 in the US, and #5 in the UK. Def Leppard had the #1, #2 and #3 records on the US catalog albums chart. Over the course of their career the band has produced a series of classic ground-breaking albums that set the bar for generations of music fans and artists alike. The group’s spectacular live shows and arsenal of hits have become synonymous with their name, leading Def Leppard to be heralded as an institution in both the music and touring industry. Def Leppard’s influential career includes numerous hit singles and ground-breaking multi-platinum albums—including two of the best-selling albums of all time, Pyromania and Hysteria, capturing the group’s legendary tracks, bringing together classic Leppard hits such as Rock of Ages, Pour Some Sugar on Me and Foolin’. The band’s 2015 self-titled studio album debuted at #1 on Billboard’s Top Rock Albums and Top Independent Albums charts. The album also took the #5 spot on Billboard’s Top Current Albums and #10 spot on the Top 200, as well as claiming 15 top 10 debuts around the world.

Now celebrating its 50th anniversary, ZZ Top has maintained the most consistently stable lineup in the history of rock music: Bill F Gibbons (guitar), Dusty Hill (bass) and Frank Beard (drums).  Fifteen studio albums, 30+ million record sales and five decades later, “That Little Ol’ Band From Texas” is still going strong, playing timeless hits like La Grange, Legs, Sharp Dressed Man and Tush to audiences the world over. They were inducted into the Rock and Rock Hall of Fame more than 15 years ago by Keith Richards who, at the time, saluted the band’s consistency and longevity, call them “the heart of rock ‘n’ roll and steeped in the blues.”  ZZ Top: That Little Ol’ Band From Texas, a feature length documentary directed by Sam Dunn and produced by Banger Films debuted last year at Hollywood’s Cinerama Dome and was thereafter shown on 150 screens nationwide.  It is set for release on DVD and Blu-ray later this month.