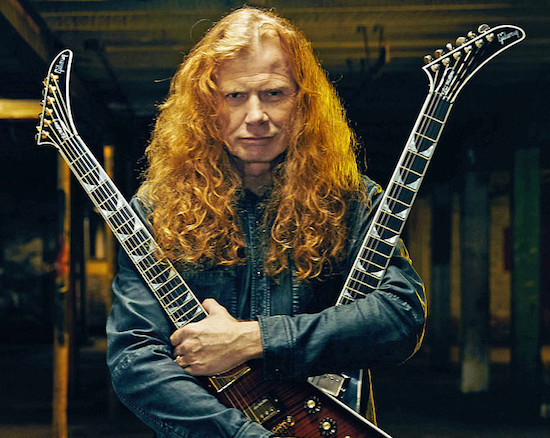 Greg Prato of Songfacts spoke with Megadeth frontman Dave Mustaine, highlights from the interview appear below.

Songfacts: Megadeth recently received their 13th Grammy nomination, in the Best Metal Performance category for the song We’ll Be Back.

Dave Mustaine: First off, that pesky little number has been haunting me for a long time. I started playing guitar at 13, I was born on the 13th, there are 13 steps on the front of my property, our address added up to 13. This being the 13th nomination, I’m hoping we continue our good run.

The last time we got nominated we won. It was a long time coming. I have to tell you, I felt like it wasn’t going to happen for us. For some reason, I listened to my management and was told, “You probably should go this year.” It was when Dystopia came out, and it won for Best Metal Performance [at the 2017 ceremony]. It was great to do that.

Songfacts: What’s the hidden gem in the Megadeth catalog?

Dave Mustaine: I think one of the best songs I’ve ever written – as far as drama is concerned, like a picture within a song – is Wanderlust. I always thought Wanderlust was one of the best songs that we had recorded, with the lyrics, the singing, the climax to the song. It just came out at a time when the music populous were liking a different kind of music…

Songfacts: What song by another artist had the biggest impact on you as a songwriter?

Dave Mustaine: I don’t know that there’s any one song that had the biggest impact as far as a songwriter is concerned. I did learn the majority of my guitar playing from the New Wave of British Heavy Metal, and I learned the majority of my songwriting from the British Invasion. So a lot of it was music from the UK, which copied American rock and roll from Robert Johnson, and it all goes back to Satan. [Laughs]

Songfacts: Who are some guitarists you admire?

Dave Mustaine: Eric Johnson is one. I just think he’s magic on the guitar. And I was really surprised by Dweezil Zappa. I think a lot of the household names in metal can go without saying: Michael [Amott] from Arch Enemy, and some of the guys like Jeff Loomis. And the guys from Lamb of God and the guys from Trivium. They’re all really good guitar players in their right.

And I really think it’s time for the guys in Metallica to step up, and us do one last round, see if we can get Slayer to come out of retirement and do a “Big 4 passing of the torch” to the new Big 4. It would remain to be seen who they are, but I have a feeling it would include some of the players we already mentioned.

I think it would be really cool symbolically if we did something at like, the LA Coliseum, even if it’s one show and that’s it. Slayer is from Los Angeles, so it would probably make it more convenient for them to go home at night. I personally have been hoping for this for a while, and I keep asking and asking and asking. They’re just not into it. But that’s up to them.

Songfacts: Recently, there was talk that you’d like to collaborate again with James Hetfield. Have you actually discussed that with him?

Dave Mustaine: The last time we talked it didn’t end very well because we have some memory of a couple of things that took place when I was in the band. I remember it one way and he is saying that it happened another. But it’s about somebody else – it’s not even him. He’s talking to me on behalf of “you know who” [Lars Ulrich].

They wanted to release No Life ‘Til Leather [the early Metallica demo Mustaine was on] – 27 songs, posters, flyers, pictures, everything. I said I would love to do this thing, and James said, “Look, we f–ked up. The last three things we’ve done failed abysmally.”

He said it was Lulu [Metallica’s collaboration with Lou Reed, released in 2011], something called Orion [a festival called Orion Music + More that took place in 2012 and 2013], and there was one other thing… I think it was a film about a fan or something [the 2013 film Metallica: Through the Never]. I don’t know. I don’t see them as a failure.

But, I had said, “Yeah, I’d be interested.” And he said, “We’d like to get everything right with all the history, the publishing and stuff.” And I said, “Good.” Because part of the reason why we haven’t been able to really reconcile is because I had songs that when I left I didn’t want them to record, and they went ahead and recorded them but they didn’t pay me what my share of the songs were.

James and I wrote Metal Militia and Phantom Lord – every note. And somehow, on the record [Kill ‘Em All] it says Lars gets 10%. And on Metal Militia that Kirk gets some of it, and he wasn’t even in the band!

And I thought to myself, you know what? When you guys did that to me before, it was not cool. I said, “Don’t use my stuff” and you did it, and then didn’t give me my fair share. So why would I want to willingly enter into something like that? I wouldn’t. So that’s where we stand right now.

I would love to work with James. I’d like to work with Lars again, too, but I think the real talent in Metallica has always been around the guitar – everybody makes fun of the drums.

Lars is a really great song arranger. And believe it or not, I watched him on a piece-of-s–t acoustic guitar write the opening riff to Ride The Lightning. [Sings riff, which turns out to be Master of Puppets]

You know what that was? It was a guy with a guitar that doesn’t know how to play, and he’s going [mimics playing a chromatic run] on the neck. It wasn’t anything really mind-blowing by any means. The way James played it made it mind-blowing.

Songfacts: The melody of the riff you just hummed, it sounded more like the song Master Of Puppets. Was that the song you meant?

Dave Mustaine: Yeah, whatever that is. I don’t f–kin’ know their song names. I don’t listen to them. I totally respect them, I just don’t listen to them. It’s not out of me not liking them. When they come on the radio in my car, a long time ago I would change the channel, but I don’t anymore. It’s just music, and I’ve been able to put all that stuff behind…

Songfacts: What’s an example of a song that means something different to you now from when you first wrote it?

Dave Mustaine: Well, I’d have to say the song that has been the most misunderstood is The Conjuring. “Mary Jane is way more dark than The Conjuring is. Mary Jane was off the So Far, So Good… So What! record, and The Conjuring was on Peace Sells… But Who’s Buying?

One is about black magic and conjuring a spirit [The Conjuring], and the other is about a witch who gets buried alive by her dad [Mary Jane] – this is supposedly true, because the gravestone is at a place we went and visited. It’s not in the place that I was told it was – it’s in Iowa. I heard it was in Minnesota, but it’s in Iowa. I think it’s right on the border. But we drove up there and someone said, “You’ve crossed into Iowa.”

Mary Jane Terwillegar is the name of the witch, so that’s why I called it Mary Jane. It wasn’t about pot. I wasn’t writing about drugs back then. I don’t think I’ve ever written a song like that…

Megadeth’s latest album, The Sick, The Dying… And The Dead!, was released on September 2nd through through UMe.