DAVE MUSTAINE AND SCOTT IAN DISCUSS THE CURRENT ROCK SCENE, WITH DAVE SAYING, “THERE ARE NO MORE ROCKSTARS” 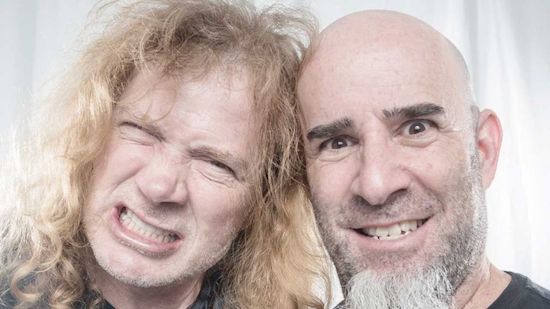 Metal Hammer: What do you think of where metal is right now?

Scott: “Well, it’s good! We’re still out, we’re making records, we’re selling tickets, we’re having fun in so many ways. In some ways, nothing has changed from 30-something years ago because we’re still doing the same thing and playing a lot of the same songs. The only thing that’s changed is that the audience has got a lot younger!”

Dave: “I agree with Scott that the audience is younger, perception-wise, but for me, the spirit in our bands is still very young. We love playing this music, because we love that interaction with the fans.”

Metal Hammer: Out of all metal’s subgenres, thrash has survived in its purest form. Why?

Dave: “I think that a lot of times, when you look at most thrash stuff, it depends on who the person is that’s listening. If I’m listening to it now, it’s a completely different paradigm shift to someone who’s considerably younger than I am.”

Scott: “What we started back then with all these other bands, I just think the reason why it’s lasted so long, generation after generation, is because we created something great. We really left a mark. It didn’t just disappear. It wasn’t a trend. It wasn’t a fad. It’s music. It’s a branch on the tree of metal that just keeps growing. I mean, we did something really good back then, you know?”

Scott: “That initial foundation that we built in the 80s, it’s still really strong.”

Metal Hammer: Do you think it’s harder or easier to be a young metal band nowadays?

Scott: “I don’t know, you’d have to ask the younger bands, I guess…”

Dave: “It’s a double-edged sword. It’s so much easier for new bands to get their music out, but it’d be safe to bet one of my balls on the fact that Scott used to go into the same record store I did in San Francisco called The Record Well. And the fact that back then you could find a record store that’s strictly metal, and you walk in there and the person behind the counter will know you, and you can walk in and they can tell you what’s new. ‘The new Tank record’s out!’ or ‘The new Raven album’s out!’ or, ‘Dude, what do you think of the new Witchfinder General?’ And we were in there, like, ‘God damn, these are my people!’ It just feels great when you used to go into one of those stores, and you see people there that are like you. There’s not a lot of stores out there like that any more.”

Metal Hammer: So you think it’s a mixed bag for metalheads right now? What do you think of the general vibe around the scene at the moment?

Dave: “There are no more rockstars. You know what you got? You got a lot of snot-nosed kids that work at music magazines – no offense.”

Metal Hammer: What advice would you give someone if they walked in here and said they were starting a metal band?

Scott: “I’d tell security to throw them out. Ha ha! Actually, you know what? So I would tell a new band, ‘Go watch Code Orange.’ They remind me of us in 1981 when all we wanted to do was bang our heads and make people listen to our music.”

Dave: “That’s what’s missing. That is exactly what’s f–king missing. These f–king new bands, these spoilt motherf–kers whose parents are attorneys or doctors, and they take every penny they’ve got and invest it in their productions, so they’ve got the big screens and the explosions and the dancing girls and the inflatables and the f–king ego ramps. They don’t know what paying their f–king dues is.”