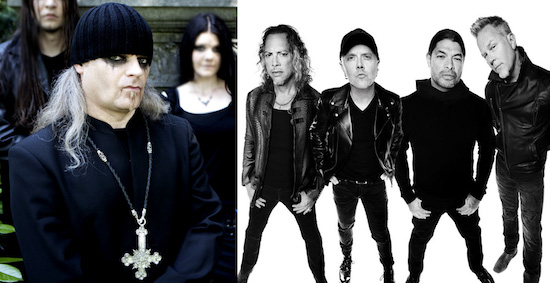 Back in May, Kirk Hammett and Robert Trujillo covered Celtic Frost’s The Usurper as part of the regular “Doodles” section of Metallica’s live show.

Celtic Frost’s Thomas Gabriel Fischer (a.k.a. Tom G. Warrior) was asked about the cover by Rolling Stone of which he said, “They butchered it, and it was humiliating. Why don’t they leave their millionaire fingers off it? They’ve long lost the ability to play true metal in my opinion. Maybe I should go onstage and do a really miserable version of [Metallica’s] Hit the Lights with, like, 200 mistakes to set the balance.”

He is no fan of Metallica frontman, James Hetfield, either, stating, ““This is completely personal, and I know probably the majority of your readers will not share this feeling, but even if they had done a fantastic job, I could puke all over it because I don’t support people who go hunting bears for a hobby. I cannot respect a person like that, even if it’s a genius musician.”

Read the entire interview here and watch Metallica’s cover of Celtic Frost’s, The Usurper, below.