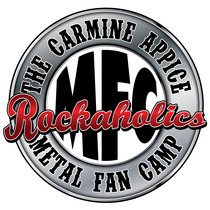 Carmine Appice is known not only as a heavy metal progenitor for his visionary work with Vanilla Fudge (and later Cactus, the power trio Beck, Bogert & Appice, Rod Stewart, King Kobra, and others), but also as a tireless drum evangelist and educator through both his best-selling Realistic Rock Drum Method and decades of clinics. Rockaholics Metal Fan Camp is not so much a forum for preaching and teaching as an opportunity for shared social experience.

Carmine has a variety of TV, radio and live appearances scheduled leading up to the Rockaholics camp. Carmine will be the featured guest musician on VH1’s That Metal Show for the episode airing June 1st and again June 29th at 11:00 PM Eastern/Pacific. He’ll hit the road with the legendary and groundbreaking Vanilla Fudge from June 6th-22nd. Carmine will be a featured guest on the nationally syndicated radio show Eddie Trunk Rocks on June 21st. From June 27th-29th, Carmine will tour with Drum Wars, the world’s premiere rock drum show, featuring brothers Carmine and Vinny Appice (John Lennon, Black Sabbath, Dio, Heaven & Hell) demonstrating their sensational drumming abilities in this entertaining no-holds-barred battle to the finish. Please see below for a full tour itinerary.

Then from August 26th-30th, Carmine will be found at the Rocklaholics Metal Fan Camp at Full Moon Resort. Rockaholics camp sessions will feature road warrior stories, musical performances by individual artists, Q&As, and more-ending with nightly jam sessions featuring the camp’s celebrity counselors. Also planned is the Carmine Cookoff, inspired by his Cooking With Carmine segment which can be viewed here. Additional details about the daily schedule will be announced soon.

Carmine Appice’s Rockaholics Metal Fan Camp offers a variety of pricing options, based on the variety of available accommodations. Packages are on sale now at carmineappicefancamp.com/pricing, and start at just $795, including lodging, access to all gourmet meals, performances, and camp activities.

All activities will be held at Full Moon Resort in Big Indian, NY, which features an eclectic array of comfortable, rustic country-inn accommodations as well as tent camping. All accommodations are just steps away from daily camp activities. Guests can enjoy the spring-fed swimming pool, on-site access to the Esopus Creek, and explore the splendors of the Catskills on the nearby network of hiking trails. Dedicated to the celebration of nature, music and the arts, this one hundred-acre wonderland of mountains, fields, and streams is a world of its own.

Carmine’s tour itinerary is as follows: