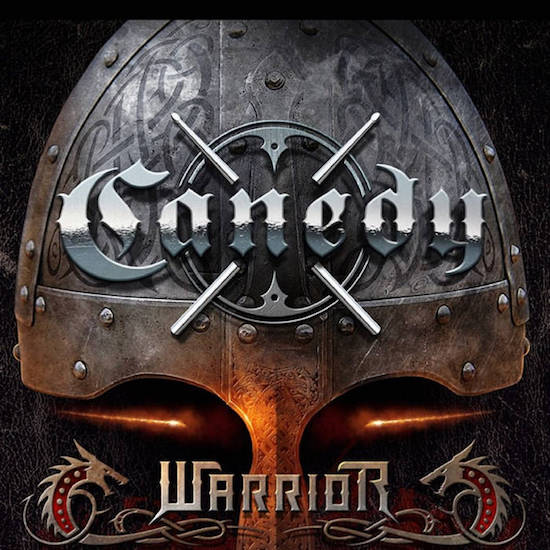 One of the most respected names in all of metal, Carl Canedy, is ready to unveil the latest release by his solo project, Canedy, entitled Warrior. Released on May 8th with digital and streaming versions, and on August 7th on CD and vinyl via Sleaszy Rider Records, Canedy is comprised of Mike Santarsiero (lead vocals), Charlie Russello (guitars, synth), Tony Garuba  (bass, vocals, cello), and Carl on drums. And as evidenced by the material on Warrior, it is a decidedly vintage metal sound with a modern approach that the quartet specialize in, as seen/heard in the first video for the album’s title track.

“I had been looking for musicians who lived close to me, and who were interested in writing original material,” recalls Carl. “After my first Canedy album, I wanted my next project to be a true band effort. Tony, asked me if I would do a TV show with him and his former band TLC (Totally Lost Cause). I did the TV show with them, and we all worked so well together we decided to write and record an album. I couldn’t have asked to work with more talented guys. Tony, Mike, and Charlie are all great songwriters and musicians.”

“The beginnings of this project was a drummer bailout on a TV appearance,” adds Tony. “I had been playing with Carl in a party/wedding band and he graciously bailed us out, hearing Carl’s take on what we were doing planted the seed of things to come. With Carl in the fold it freed us up to let our imaginations run wild – Mike’s vocals have never been better and Charlie’s guitar playing transforms the ordinary into extraordinary. What’s exciting is this project was very organic – whoever’s the main songwriter the rest of the band chips in.”

Warrior is comprised of 10 tracks total, of which the band explains the story behind each rocking track:

1. Do It Now –  is an autobiographical cautionary tale about workaholics with children.

2. Not Even Love – is a dark tale of an artist who might be willing to give up everything he has, family included, to return to his past life again.

3. Lies – is the admonition of people who suspect that their beliefs defy logic and scientific fact, but still selfishly cling to those beliefs, much to the detriment of society at large.

4. Hellride –  is God’s most formidable angel battles Satan in hell with vocals by Tony.

5. Warrior –  is the story about the abandonment of, and the triumphant return to, the type of songs we love to write.

6. 3rd Times A Charm – is a story of a young man and his trials and tribulations with love.

7. Out For Blood – is a societal statement.

8. In This Sign –  is the story of emperor Constantine and Rome embracing Christianity.

9. The Prize –  encourages us to never give up on our dreams and aspirations. In time, we may find a way to make things happen.

“We are very excited to sign Canedy and to release their upcoming masterpiece, Warrior,” says Tolis G. Palantzas (owner/managing director of Sleaszy Rider Records). “Carl Canedy is a talented musician (drummer of The Rods), a great and well-known producer (Anthrax, Overkill, Blue Cheer, Possessed, etc.) and a cool, easy going guy above all. We have a very good experience working  with him in the past, releasing the 2016 album by American hard rockers St. James, where Carl played the drums. As we are often in touch with Carl, it became a mutual interest to collaborate and to release Warrior, a pure heavy metal album, that I loved from its first tunes. The album has a massive sound and production, it’s heavy, it’s epic, it’s catchy, melodic, powerful and I’m sure that all metal fans will love it the same as we did. The artwork of Eric Philippe is wonderful and I imagine now how beautiful it will appear on the final vinyl and cd editions we will print! We can’t wait till the 7th of August release date of Warrior.”

And, Carl enthuses, “Having worked with Tolis and Sleaszy Rider records on the St James re-releases, I knew signing with them we would be working with a person and label of integrity. Although, there were several labels interested in the band, we felt Tolis and Sleaszy Rider to be the best label for the Canedy ‘Warrior’ album.”

Canedy’s name is long-familiar with metalheads worldwide – as he was the drummer for the Rods (and a brief early drummer of Manowar). But it is as a producer that Canedy is most known – as he oversaw the recording of classic recordings by the likes of Anthrax (Fistful Of Metal, Armed and Dangerous, and Spreading the Disease), Overkill (Feel the Fire), and Blue Cheer (The Beast Is Back’ in the ‘80s.

And now, Canedy is putting both his production and artistic talents to good use on Warrior. “I am really proud of this album and the fact that we can do these songs justice live. I’m looking forward to people hearing the album and catching a live performance. I’m thrilled to be part of a band that is as strong live as it is in the studio!”

DRIVE-IN CONCERTS MAY BE FUTURE OF LIVE MUSIC AMID CORONA ›