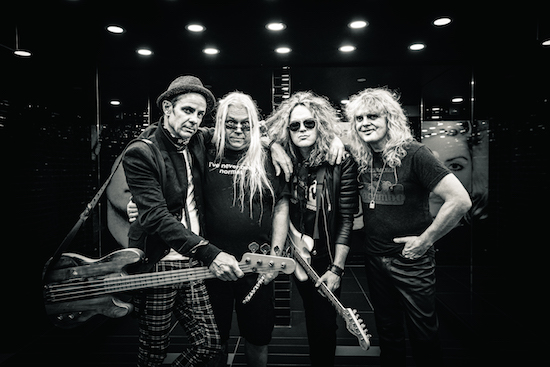 One of Canada’s most beloved and iconic hard rock bands, Coney Hatch first rose to prominence back in the golden era when vinyl was king – and the preferred format of most music fans.

So, it makes perfect sense for Coney Hatch – Carl Dixon (guitars/vocals), Andy Curran (bass / vocals ), Dave Ketchum (drums, vocals) and Sean Kelly (Guitar /vocals)  – to finally release their  first ever long awaited live record on a 2 LP vinyl set. The set list reads like a “best of” for any Coney fan including songs from their debut classic 1982 Anthem/Mercury album along with selections from Outa Hand (1983), Friction (1985) and Coney Hatch Four (2017). Coney Hatch enjoyed major radio airplay success in Canada and the USA in the early 80’s and with the help of MTV landed many prestigious special guest slots touring along side Judas Priest, Iron Maiden, Krokus, Accept, Ted Nugent, Cheap Trick, Peter Frampton, Triumph, The Tubes and Edgar Winter to name a few. They became instant press darlings with Kerrang Magazine & Sounds but didn’t actually tour overseas until 2014, where they headlined Firefest in Nottingham UK.

This first ever Coney Hatch Live record set is available independently now through the bands official web-store- rockpapermerch.com/collections/coney-hatch as well as Isotope distribution isotopemusic.com/contact.html for retail. A limited amount of CDs will soon be made available at these same outlets.

You can check out the band’s video of the opening song live from the legendary El Mocambo, below.

“We’re really proud of Live at The El Mocambo. It ’s our first ever live record record and it captures the spirit and true sound of our band. There’s some really great moments from our return to the iconic ElMocambo and it would not have happened without the passion of Elmo CEO Michael Wekerle…huge high five to Wek,” said Andy Curran

We Got The Night

Stand UpFirst Time For Everything

Wrong Side of Town

The 15 song set was captured during the bands Nugs.net live stream show last October 3rd, 2020 and was engineer by Doug McClement and mixed by Vic Florencia, both are Juno Award winning engineers.

That album was also the highest-charting of the band’s career and earned them a Gold certification in Canada.