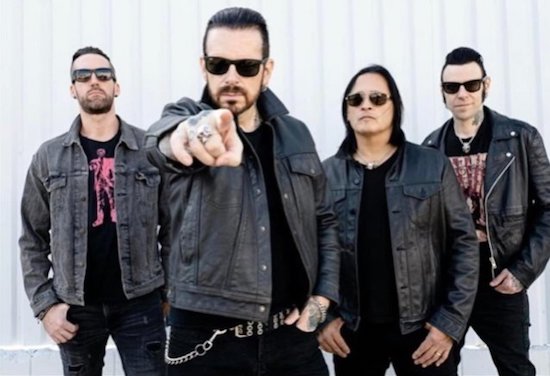 The new Black Star Riders album, titled Wrong Side Of Paradise, will be released on January 20th, 2023 through Earache Records. The latest single, Pay Dirt, can be streamed below.

Frontman Ricky Warwick states, “We are overjoyed to be able to give you another track from our upcoming album Wrong Side Of Paradise. Pay Dirt is available for your listening pleasure on your favorite streaming service now. Christian Martucci and the late Todd Youth wrote the music for this. And when I heard it, it stank with defiance and attitude. It didn’t need changing, just some words to echo the power of the chords. It’s an ode to rock ‘n’ roll… but also a dig at those that don’t learn their art and don’t play from the heart!! Rock ‘n’ roll is my lover, friend, enemy, ally, religion and savior. Rock ‘n’ roll is my life. We hope you love it.”

Wrong Side Of Paradise, features 11 tracks, and many formats are available for pre-order. This includes a limited colored vinyl (green, blue, red and black/white split), black vinyl, signed CD, cassette and digital download. A special edition of the album containing two bonus tracks can be found on CD (which comes with a 24-page booklet) and USB stick formats. Various collector bundles are also available.

The official music video for the first single, Better Than Saturday Night, featuring backing vocals from Def Leppard‘s Joe Elliott, can also be seen below.

Warwick previously said about Better Than Saturday Night, “Better Than Saturday Night is a feel-good, uplifting tune about staying strong in the face of adversity, being true to yourself, and the power of positivity. I wrote it for my kids, but subliminally I think I also wrote it for myself and everyone for those days when we need to find a little bit of extra strength. We wanted to reflect the positivity, power, attitude and strength to endure sentiment in the lyrics of the song. And no better way to do that than Black Star Riders rockin’ out with the Los Angeles Roller Derby Dolls.”

About the album, Ricky added, “I am very proud of this record, Black Star Riders’ fifth release and the first with our new and exciting relationship with Earache Records. As with all BSR albums, Wrong Side Of Paradise is an anthemic statement of intent, driven by ferocious guitars and thundering drums. I can only write about my own personal experiences, my families, my friends and how I see a world that is unraveling and changing faster than we can comprehend. That being said, I’m a firm believer in the power of positivity, something that echoes throughout this album.”

Wrong Side Of Paradise track listing:

In addition to releasing the new record, Black Star Riders have some special plans to celebrate their 10th anniversary next year.

“Can you believe 2023 is 10 years of Black Star Riders?” Warwick said. “How time flies while you are having fun! We decided to do something special to commemorate this occasion. For the U.K. tour only, to coincide with the album’s release, we will be bringing back the legendary Scott Gorham (guitar) and Jimmy DeGrasso (drums) for the dates to make them extra special.”

“As we all know, the worldwide pandemic has changed so many things in all our lives, and when we brought Christian Martucci into the fold in 2018, we had planned to work the BSR cycle in rotation with Christian‘s Corey Taylor/Stone Sour gig so he could do both. The two-year break in live music has unfortunately put paid to this plan and Christian has had to leave Black Star Riders to concentrate on his work with Corey. We wish him all the best and he will forever remain part of the BSR family.”

Black Star Riders start their U.K. tour in Nottingham on February 13, 2023 in a tour package that includes very special guests Michael Monroe and Phil Campbell And The Bastard Sons.

‹ SMITH/KOTZEN RELEASE LIVE VIDEO FOR “GOT A HOLD ON ME,” FROM THEIR UPCOMING “BETTER DAYS…AND NIGHTS” ALBUM DUE SEPTEMBER 16TH