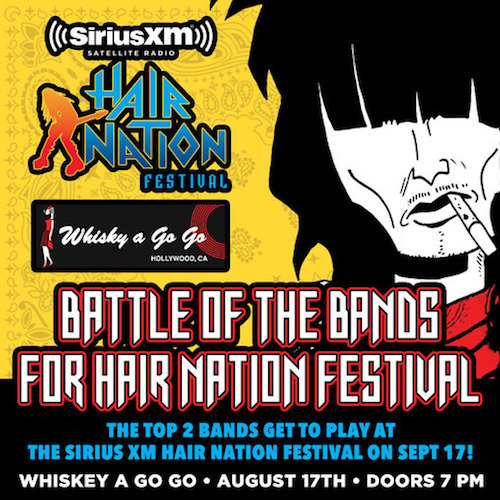 With the upcoming SiriusXM’s Hair Nation Festival happening at Irvine Meadows Amphitheatre on Saturday, Sep. 17, the world of rock was front and center on Wednesday night to celebrate the occasion. The gathering was all about the official SiriusXM’s Hair Nation Festival Battle of the Bands which took place at the legendary Whisky A Go-Go. The event featured performances from several unsigned bands competing in hopes of winning an opening slot for one of the stages at the festival next month.

Judges for the evening included Eddie Trunk, Lita Ford, Tracii Guns (LA Guns), Brent Woods (guitarist for Sebastian Bach), and Jay Ruston (producer/engineer for artists such as Anthrax, Steel Panther, Stone Sour, The Winery Dogs, and more). AXS.com was there to speak with some of the judges and to hear all of the new music firsthand as the bands took the stage.

…Lita Ford told AXS, ““[Rock music] it’s really changed. Mainly, it’s not just for men anymore. In The Runaways days we would play a show and we would look out into the audience and it would just be all dudes…But now, you go out and half the front row is women. They’re cheering you on and singing every word. It’s really cool to see”. When it comes to today’s women in rock, Lita sang the praises of Lzzy Hale, and even mentioned that they have some upcoming shows with the band this October.

[AXS spoke with our very own] Eddie Trunk about the evolution of music through the years and explained, “Strictly speaking in rock, the ‘80s became like two different worlds. You had the hard rock stuff, which is really what this festival is about and then you had the harder metal side, which was [groups like] Metallica, Anthrax, Megadeth, and Slayer. Both of those genres did really well and coexisted side by side for a while”. Eddie expressed, “One of the things that I really like about what’s happening now is that there’s a real movement it seems, to go retro”. For him, groups such as Rival Sons and Monster Truck have the ability to capture that kind of Rock N’ Roll essence today.

The TV and radio host then left some valuable words of wisdom to musicians out there, “Write great songs. It’s the thing that really separates people from the pack. Production and playing, all of that can be worked on, that can all be built on, but can you write great songs?”