IN HIS UPCOMING AUTOBIOGRAPHY, KISS FRONTMAN PAUL STANLEY REVEALS THAT HE FELT AS IF BANDMATE GENE SIMMONS WAS A “TRAITOR” AND THAT FORMER MEMBERS ACE FREHLEY AND PETER CRISS ARE ANTI-SEMITIC

When Paul Stanley, frontman and rhythm guitarist for the band KISS, married in November 2005, he shared his joy with friends and family, including bandmates Eric Singer and Tommy Thayer.

“Your views on marriage are your own,” Stanley told Simmons, who publicly denounced the concept of marriage until his own nups in 2011. “But when you insult and demean people who get married and ridicule or dismiss the idea of marriage, you have no place at a wedding.”

The incident is replayed in Stanley’s memoir, Face the Music: A Life Exposed, written with journalist Tim Mohr and out Tuesday.

As success came [to the band], Stanley noticed in interviews that Simmons “sure used the word ‘I’ a lot.” Stanley accuses him of abandoning the band in the early ’80s, distracted by attempts to become an actor, but then taking credit for Stanley’s work; and also of using the KISS logo and persona for personal projects without contractual permission.

During this time, Stanley writes, Simmons’ duplicity left him feeling there was “a traitor in the midst.”

As harsh as Stanley is with Simmons, he saves his real venom for former band mates Frehley and Criss. After it was announced back in December that KISS will be inducted into the Rock and Roll Hall of Fame at Barclays Center on Thursday, a public war erupted over which band members would play at the upcoming ceremony.

Frehley, Criss and the Hall wanted a reunion of the original lineup in full makeup; Simmons and Stanley refused, since KISS now has two other long-standing members in drummer, singer and guitarist Thayer. As of now, all four original members will attend the ceremony, but there will be no performance of the band’s music.

Stanley’s book sheds greater light on why he wouldn’t want a full-on reunion, recalling countless past times that Frehley and Criss, who have both had substance-abuse issues, were belligerent and even unable to play.

Stanley also accuses Frehley of stashing drugs “in the bags or pockets of crew members — without their knowledge — so he wasn’t on the hook if they were found.”

Even more shocking are his accusations of anti-Semitism against the pair. Noting that Frehley owned a collection of Nazi memorabilia, and that some of his earliest experiences with Criss involved the drummer racially mocking waiters at Chinese restaurants, Stanley writes that Frehley and Criss resented him and Simmons for controlling the band’s creative output — which Stanley says occurred because Frehley and Criss’ songwriting contributions “just didn’t amount to much.”

Stanley reiterated to The Post that yes, he does believe that Frehley and Criss are anti-Semitic.

“Yes, I do,” he says. “It’s based on years and years of interactions. It’s not pulled out of thin air.” Frehley and Criss did not respond to requests for comment.

Read more at the New York.

Get More:
That Metal Show

Joe Satriani Faces the Wrath of the Vault:

Everyone Tries to Stump the Trunk:

That Metal Gear with Yngwie Malmsteen:

THE ROCK N’ ROLL HALL OF FAME’S PRESIDENT ON THE KISS DRAMA: “I DON’T LIKE ALL THE SNIPING BACK AND FORTH, THOUGH MOSTLY IT’S BEEN FORTH”

The Rock and Roll Hall of Fame’s President and CEO Joel Peresman had to deal with the wrath of KISS frontman Paul Stanley, who has gone very public with his anger over the Hall of Fame’s decision to only induct the band’s original lineup. “I don’t need the Hall of Fame,” Stanley told Rolling Stone. “And if there’s not reciprocity, I’m not interested. The Red Hot Chili Peppers, practically every member was inducted, and virtually all 175 members of the Grateful Dead. Rules need to apply to everybody.”

“I don’t like all the sniping back and forth, though mostly it’s been forth,” says Peresman. “And I totally understand his point of view. What he’s failing to understand is that there are certain acts that are nominated and brought in on their entire body of work, up until the day before the nominating committee meets. They are still evolving bands that are breaking new ground. With KISS, there wasn’t a single person we spoke to that didn’t feel the reason these guys were being inducted was because of the four original members. It’s an incredibly unique situation. I can’t think of another band, outside of Gwar, that has members that are dressed up in costumes. You basically have these new members that are replicating exactly and playing the music that was created by the two other members that are being inducted.”

KISS has invited current members Tommy Thayer and Eric Singer to sit at their table, along with former guitarist Bruce Kulick. “I appreciate how Tommy and Eric have filled in and the way they do things,” says Peresman. “They are fine musicians and I’m sure they’re lovely guys, but they are basically replicating the two members that are getting inducted. How could we have asked Ace and Peter to accept the award and then have other people in their guise playing their music? They probably wouldn’t have even come. They were very clear about that. . .Frankly, I’m really, really happy that KISS are being inducted. It should have happened a while ago. The four of them will get up, accept their award, say what they want to say and then we’ll move on.”

Guitar World lists the 11 essential thrash metal albums every self-respecting metalhead should have in his/her record collection and explain the reasons why, as for 11? “Well, it’s one louder, isn’t it?”

An extraordinary display of the full range of thrash metal’s capabilities. Although Puppets isn’t quite as groundbreaking as the band’s two previous efforts, its huge sound an ambitious scope make it Metallica’s — and thrash metal’s — finest moment.

On which Slayer stake their claim as the masters of brutality, bar none. In 1986 this was the fastest and most depraved music in existence. Twenty-eight years on, it still is.

Dave Mustaine & Co. were always touted as the most dangerous band in thrash, but here they show that they earned that title for their wicked instrumental dexterity rather than for their infamous bouts with drugs and alcohol.

An influential and essential early thrash masterpiece. Exodus never received the level of recognition enjoyed by many of their peers, but no band was ever more dedicated to the cause than these Bay Area bashers.

The sound and Fury of Metallica’s debut sparked the birth of a genre. Powered by galloping tempos and air-tight riffing, Kill ‘Em All rumbles along with the intensity of a well-oiled machine, its menacing ferocity barely concealing the giddy excitement at its core.

Anthrax: Among the Living:

The first half of the record comes close to thrash perfection, comprising as it does four rapid-fire, neck-snapping tunes that are among Anthrax’s best work.

Overkill – The Years of Decay:

This is music as cold and hard as the New York/New Jersey streets that Overkill call home.

Four high school friends conjure the devil in their parents’ garage and in the process give birth to death metal.

Pantera are perhaps the one band revered equally by old and new-school metalheads, and Cowboys, their major label debut, was as influential in the Nineties as Kill ‘Em All had been in the previous decade.

Often overlooked by thrash fans on this side of the Atlantic, Kreator are another classic thrash band who many would say are churning out the best albums of their career now. That said, it’s tough to beat the pummeling riffs found on 1990’s Coma of Souls.

That Metal Show wraps up its latest season, lucky number 13, with a guitar player’s dream episode. Guitar virtuoso and instructor to some of music’s finest players, Joe Satriani, stops by the set to chat with hosts Eddie Trunk, Don Jamieson, and Jim Florentine. Joe shows off his upcoming release: the complete music anthology contained inside a USB mounted miniature replica of Joe’s head, and trademark sunglasses. Joe updates the hosts and audience about his upcoming tour, future plans, and the status of his latest band Chickenfoot; with Sammy Hagar, Michael Anthony, and Chad Smith. Joe also engages the hosts in the rapid-fire Q&A segment, Put It On The Table. His answers include the songs he wishes he wrote and the other bands he would have liked to have been a part of. The season finale of That Metal Show airs this Saturday, April 5th at 11:00PM ET/PT.

Comedians Artie Lange and Jim Breuer join the illustrious panel to discuss their love of metal and comedy. Artie discusses how he always seemed to watch “That Metal Show” while in rehab (a clinic favorite), and Jim treats the crowd to some of his finest metal impersonations, not to mention an amazing Jim Florentine impression. Episode twelve also features the hosts’ Pick Of The Week, a Throwdown pitting the AC/DC classic songs For Those About To Rock and Highway To Hell” against each other, and a TMS Top 5 discussing the Top 5 Desert Island Hard Rock Albums. This week’s Stump The Trunk finds Eddie ending the season with the audience testing his knowledge of all things Satch, with some less than victorious results, which of course brings out everyone’s favorite Miss Box Of Junk, Jennifer.

Guitar legend Yngwie Malmsteen returns to That Metal Show for the season finale, after shredding the walls down in episode 11. He is the only guest musician to perform twice this season. Yngwie wows the crowd with his fretwork and even shares a story of him and his colleague, Joe Satriani, playing together in the past.

Season 13 of That Metal Show premiered on January 18th with guests M. Shadows, Zakk Wylde and Jason Hook. This season brought some of the biggest names in hard rock and heavy metal to the show including members of Kiss, Alter Bridge, Lamb of God, Living Colour, The Winery Dogs, Motley Crüe, Sevendust, Anthrax, and Megadeth. Season 13 also featured some of the best performances in the show’s history, with the likes of Ron “Bumblefoot” Thal, Joel Hoekstra, Charlie Benante, and Lita Ford, among others. 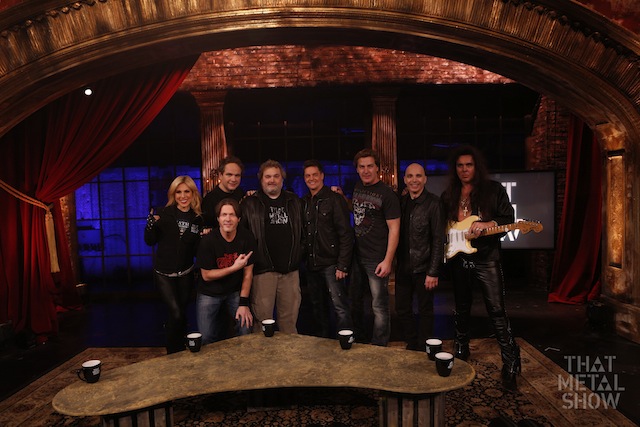 PICTURES OF EDDIE TRUNK, TESLA, CINDERELLA, WINERY DOGS AND OTHERS FROM THE “MONSTERS OF ROCK CRUISE”

All pictures courtesy of Jay Thomas: 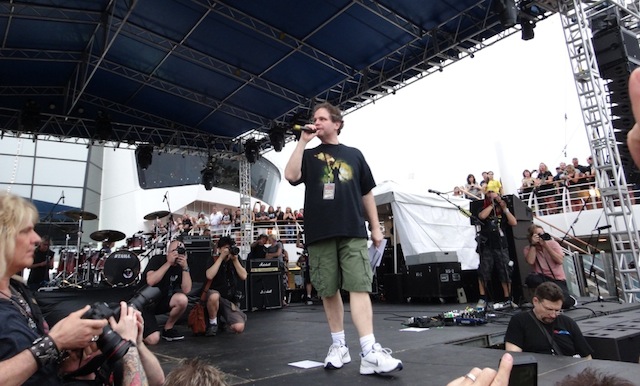 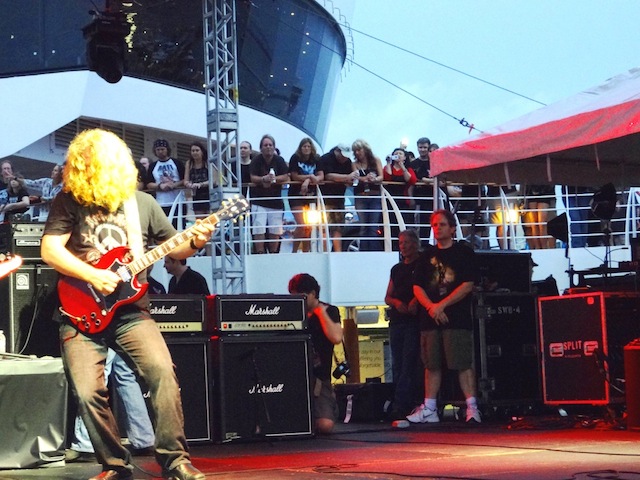 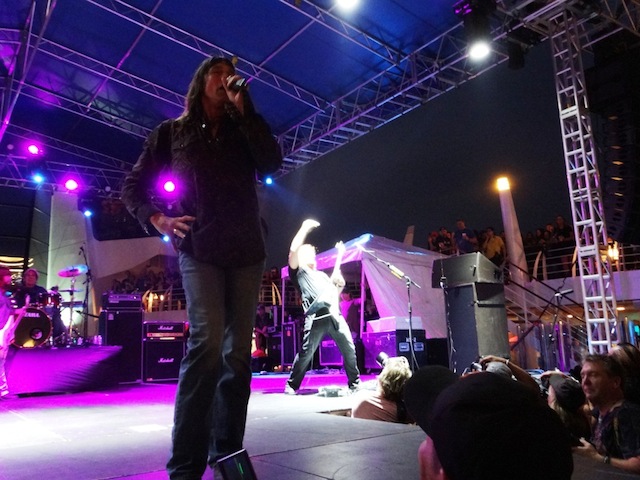 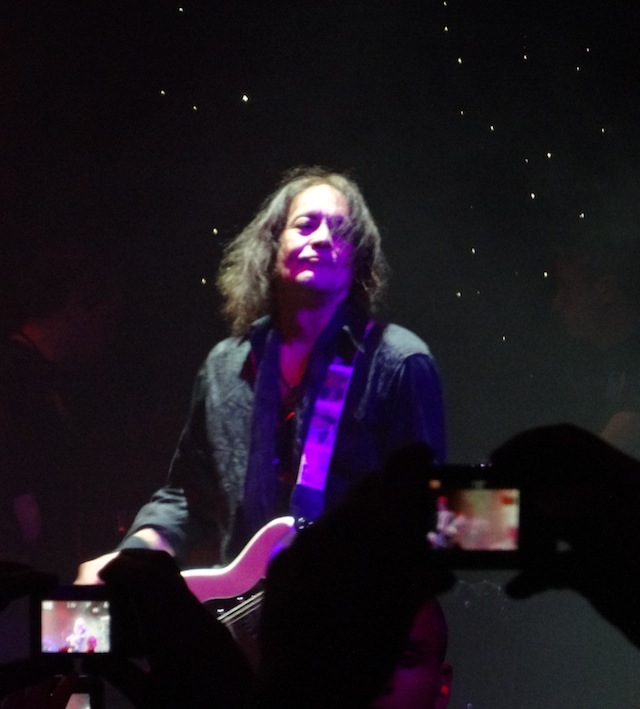 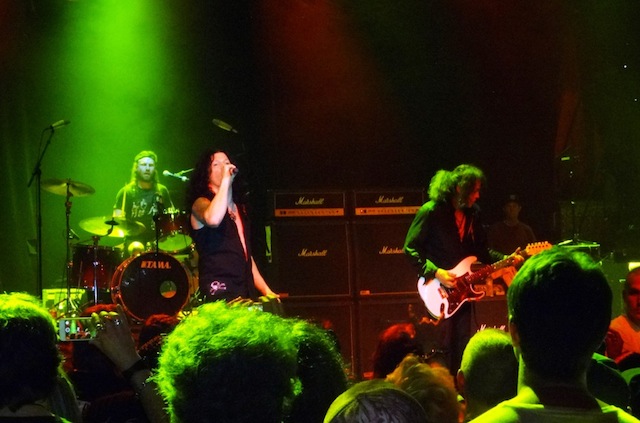 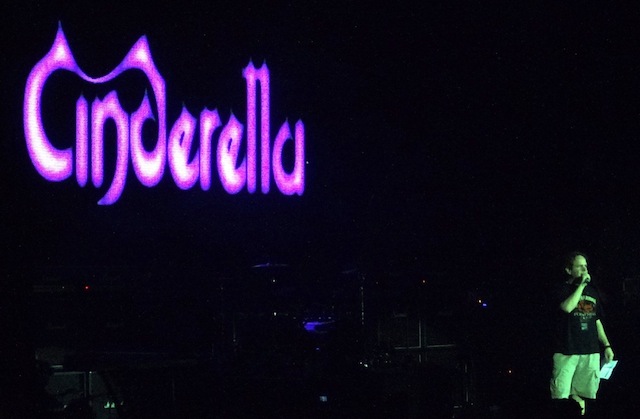 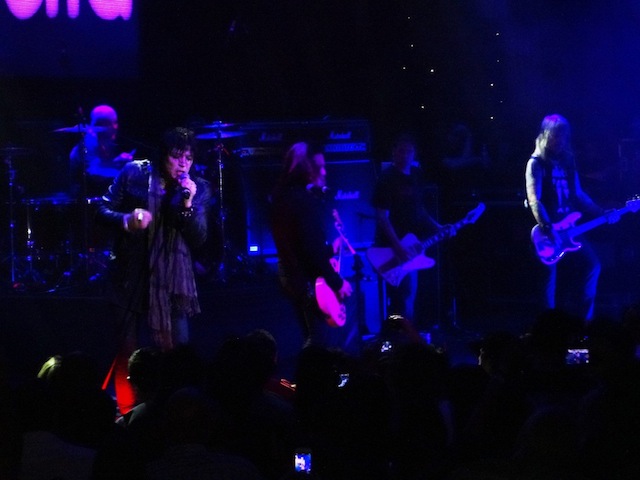 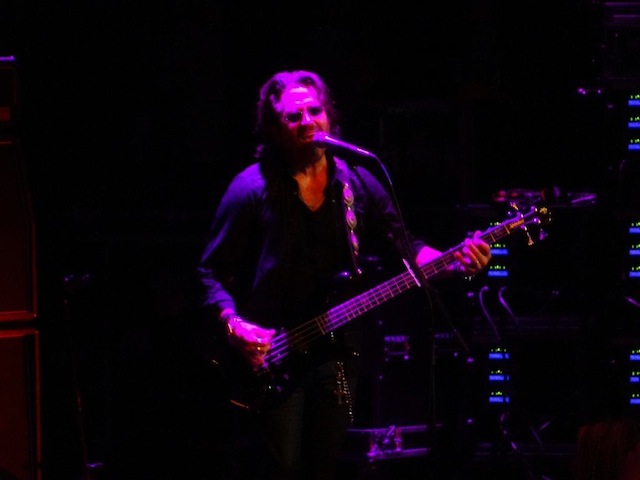 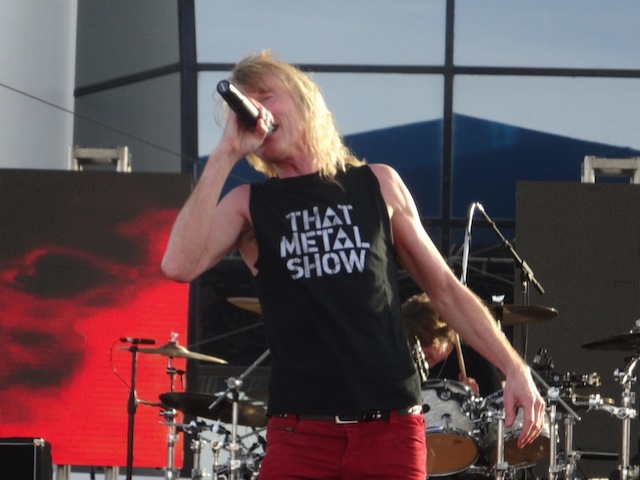 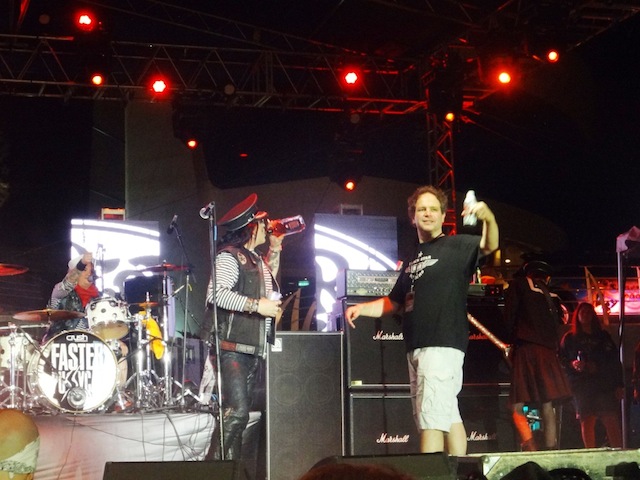 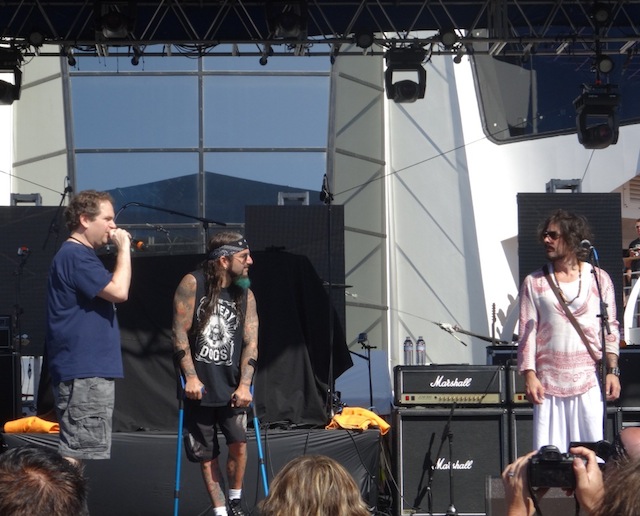 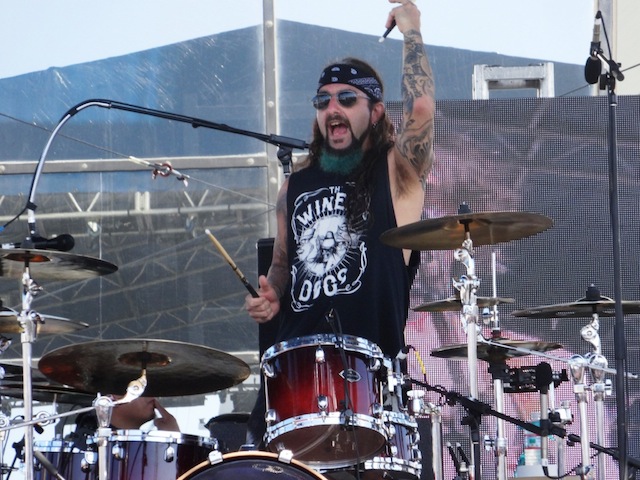 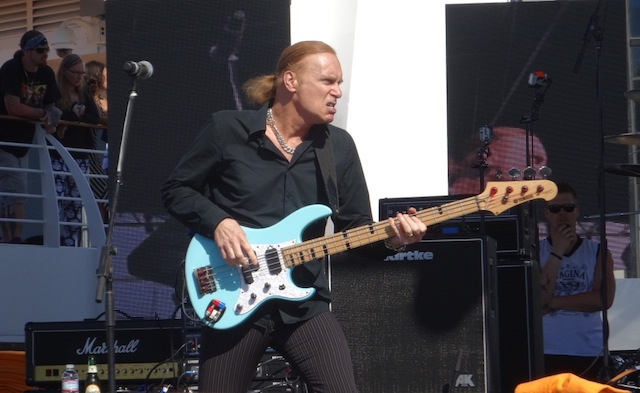 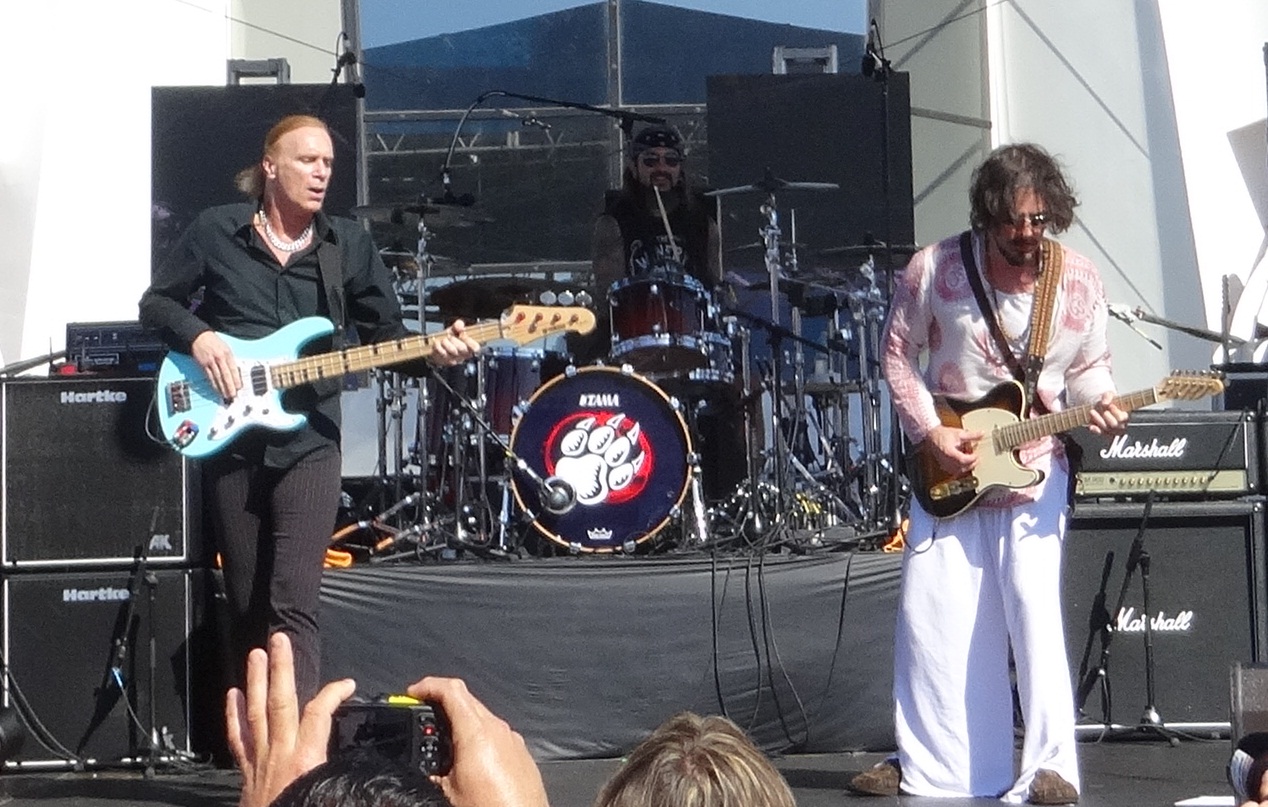 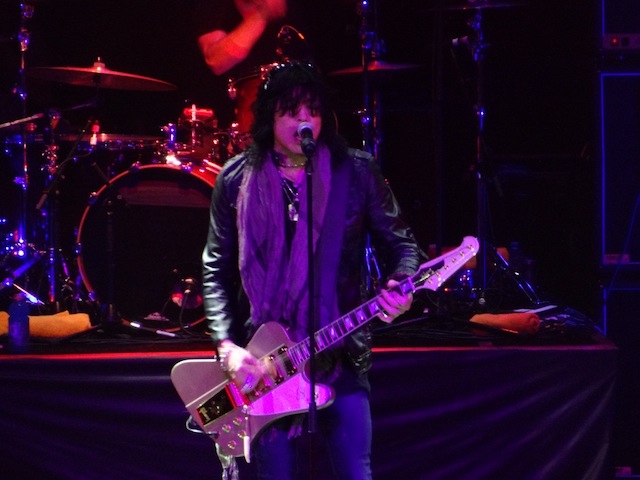 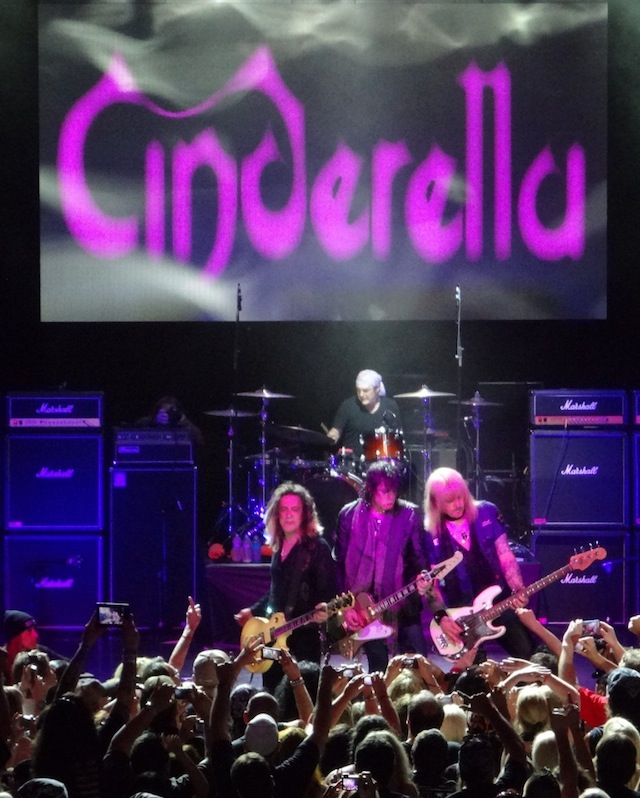 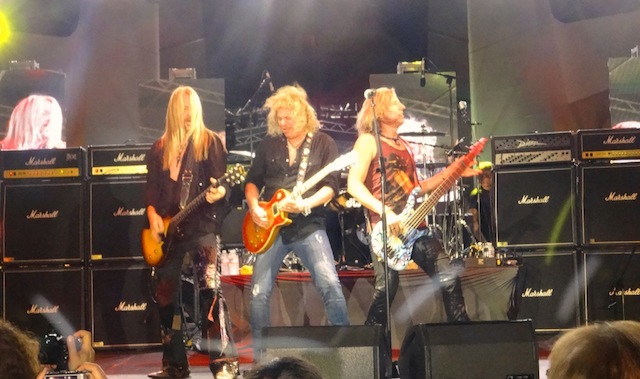