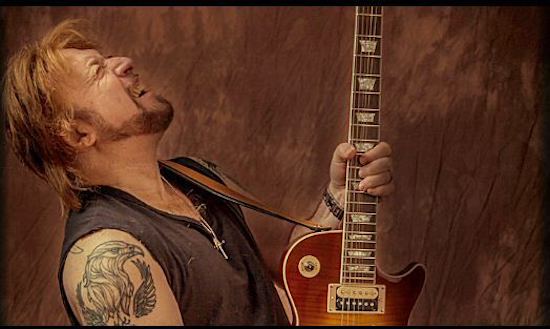 Canadian guitarist, vocalist, keyboardist, songwriter and producer Aldo Nova has released a new single, When All Is Said And Done.

When All Is Said And Done is taken from Aldo’s forthcoming rock opera, The Life And Times Of Eddie Gage, which will reportedly include 23 brand new original songs and one hour and 52 minutes of music.

Between 2008 to 2016, Nova wrote 142 songs for The Life And Times Of Eddie Gage, describing the album in an interview with Best magazine as “the story of Eddie Gage, and his evolution from light, de-evolution to darkness, and climb back up to the light again.” Aldo plays all the characters on the LP, changing his voice in each song.

A Montreal native, Nova was approached by a 15-year-old Celine Dion to producer her first album, and released Blood On The Bricks on Jon Bon Jovi’s Jambco label in 1991. It stood as the culmination of a long-running friendship and, as any knowledgeable rock fan might argue, a thank-you note of sorts: the rock superstar lifting up the personal hero whose sound provided the blueprint for his own hits.

Nova provided guitar, keys and background vocals for the demo of Bon JoviI’s first hit, Runaway, and ended up playing with an assemblage of session musicians throughout Bon Jovis 1984 self-titled debut. Nova’simprint is also all over Jon Bon Jovi’s debut solo album, Blaze Of Glory — especially the chart-topping title track, on which Nova’s writing and producing went uncredited but were absolutely essential.

Over the next three decades, Nova’s journey would take him through great professional highs and painful personal lows, and eventually into self-discovery and spiritual contentment. He decided again to focus on his roles as a writer, producer and session musician, capitalizing on the goodwill he’d generated in the industry to put food on the table for his family.

During the ’90s and 2000s, in addition to tracks for popular foreign-language artists, Nova collaborated with Carole King, Jon Bon Jovi, Faith Hill and Clay Aiken (co-writing his hit This Is the Night), and did hugely successful work with Celine Dion. In 1997, Nova won a Grammy for Dion’s blockbuster album Falling Into You and co-produced/co-wrote later Dion singles like the global smash A New Day Has Come and You And I.