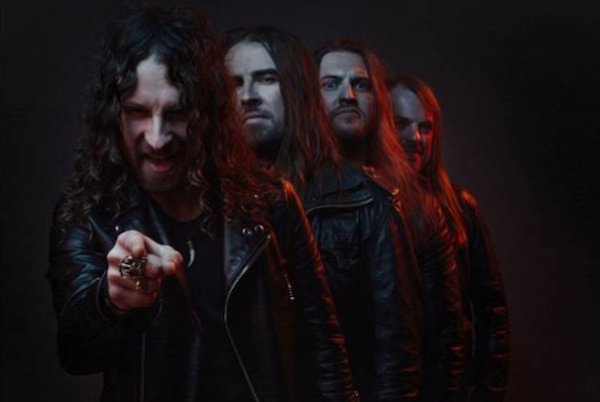 Brothers Joel, and Ryan O’Keeffe, of Airbourne, who were appearing at the Download Festival, spoke with eonmusic.co.uk, highlights from the interview appear below.

Eonmusic: Joel, you were spotted dashing through the crowd to catch Wayward Sons earlier; did you enjoy them?

Joel: Yeah, Wayward Sons, they were great. Yeah, I heard them on. To be honest, I had never heard of the band before, but backstage I was walking out of the shower – here’s a rock ‘n’ roll thing; Steve Harris just walked past, and I’m coming out of the shower and I go; “I’m not even properly dressed, I can’t say“g’day”! – I keep walking, and then I hear these riffs coming from the stage, and I thought; “f–k, I’ve got to get changed quick”, and then I went out and watched their set, and now I’m already following them on Spotify and everything. I’m into the band. I mean, I’d heard of the name, but I’d never actually heard of the band. One of the great things about festivals used to be, and it still is, where you discover bands.

Eonmusic: It’s been three years since the release of the Boneshaker album; how did that cycle go for you?

Joel: Oh yeah. We were halfway through a tour and then the whole thing [the COVID 19 pandemic] hit, but we played a lot of places beforehand.

Ryan: Yeah, we got out there on the tour, we did Australia at the end of the year in 2019, and we’ve picked things up where we left off and I’m actually pretty happy with the whole thing. And now we’re getting ready to do an end of the year tour and then another album. Soon we’ll be making another record.

Eonmusic: You’re now five albums into your career; the band has done a lot of work to get where you are now.

Joel: Oh, it’s been definitely like a big 747 taking off very slowly. Like, we’ve gone everywhere, around and around; and everything gets a bit bigger, a bit bigger, each time when we do it. We’ve always, even when we started our band, we were sitting on the lounge room floor deciding what our band name would be when we were kids, like, we knew then that we didn’t want to be a band that went up too quick. We wanted to be a band that just rises, slowly rises.

Eonmusic: Are you planning on having the new album out before [touring]; what can you tell us about that?

Ryan: After this tour, which will be closing up Boneshaker we’ll then begin to make the next one.

Joel: Yeah, we’re going to America, South America, first. We did make an executive decision during lockdown not to be too focused on trying to make rock and roll songs that make you feel very good in an environment where you’re depressed and you’re being held down by the man. But yeah, we’re looking pretty good.

Ryan: We wanted to see people again and play to crowds again before we even think about it; that’s what we’ve always done.

Eonmusic: When you’re at home, do you still play, like take out the guitar and play along to AC/DC albums?

Joel: Oh yeah, you just crank away some AC/DC riffs or whatever. I learn a few riffs from some other people, like, I was learning some Rolling Stones songs. I never really sat down to do it, and it was fun, just to learn like Keith’s tuning; ‘Keef’, sorry, not ‘Keith’!

Eonmusic: What’s happening next for Airbourne?

Ryan: And then, to make the record, it’ll be coming down to picking a producer, picking a studio, giving us some time to put together what we have, but more importantly, the riffs that we’re making out here, now. This is how we wanted to do it; we wanted to make a record when we’re rockin’, and there’s people, and the crowd is there, and then, we come offstage and throw down this and that, and put it all together. So hopefully it’ll be released sometime late next year.

Eonmusic: That’s the Airbourne ethos isn’t it; it’s all about the party and the rock and roll.

Ryan: And just people; that’s the one thing that lockdown stopped.

Joel: Never change it, mate. The bands we grew up listening to all played here when it was Monsters of Rock, and they haven’t changed. That’s how it is.

Airbourne’s North American tour is set to begin on September 9th in New York and wraps up on October 11th in Los Angeles, see their entire tour itinerary, here.