AC/DC MEMBERS AND AXL ROSE DISCUSS THE FUTURE OF THE BAND, BRIAN JOHNSON, AND PHIL RUDD 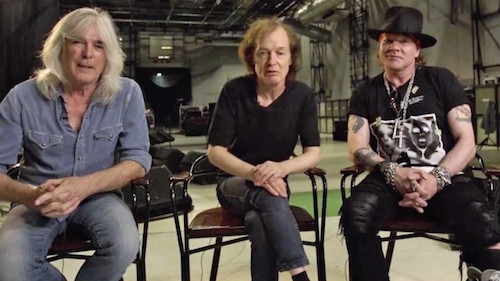 NME:How many times had you seen AC/DC play live?

Axl: “We met very early, in early Guns N’ Roses, in the first couple of years at the Forum in LA. I met him [Angus] and Brian backstage.”

Angus: “It wasn’t in that police station?”

NME: How long have you been a fan?

Axl: “Like about five minutes before that?! No, since I was a kid.”

NME: And how much of an influence did AC/DC have on Guns N’ Roses?

Axl: “Very much, it was a big influence of Izzy [Stradlin]’s and mine. And then it was something we had in common in meeting Slash. Slash’s girlfriend made him listen to AC/DC pretty much 24/7 – he didn’t really get to hang out with her unless he did!”

NME: Did you ever consider getting a number of different guest vocalists?

Axl: “They were in the process of trying to decide what they were doing as a band in general, is my understanding, because it just went down.”

Angus: “It was a crisis that came then, and we had to act. We were in Miami at the time, when all of this came up, and unfortunately, when you’re in that situation you got to make decisions pretty quick, because there are a lot of people waiting. We were supposed to actually play in Atlanta, so you’re kind of going ‘what do we do now’. Because of the nature of Brian’s deafness, we knew that there was no easy fix. So you’ve got to then say, ‘what do we do here?’ The options were very limited and you think, if we just stop with all of this machinery it’s going to be a hell of a lot of legal entanglement…”

Axl: “That, and the fans, and not wanting the band to have to go through that, as I have gone through a little bit of that at times!”

Axl: “Which I had no idea, I mean, they play really loud, they have their way of working and you never know if you’re going to blend. But it started out pretty good and its gradually got better. I’m hoping to make it through the first show before I get fired!”

NME: Did you ever consider pulling the shows?

Cliff: “We wanted to finish what we’d started.”

Angus: “And that was our main goal, especially Cliff and myself, being there the longest. We wanted to complete what we had started. And I mean, you can’t call a tour Rock or Bust and then go bust!”

NME: So what happens after these shows – does the band continue in this format? Do you get another singer? Does Brian come back?

Axl: “Whatever they’re doing with Brian, that’s not my place to talk, that’s their business. Anybody else, I will slowly poison them!”

NME: What’s his prognosis – is he able to rejoin in the future?

Angus: “He has to be very careful of what hearing he’s got left. This is what he told us – he was gutted about not finishing [the tour] because he says he would have loved to have gotten through. It was his call, what he wanted. He made that decision himself. He didn’t want to be deaf. And I perfectly understand that – when you stop doing this, you want to walk away with all your pieces! I don’t even want to leave without my fingernail!”

NME: Tell me about learning the songs – did you know all the words already? How did you teach yourself?

Axl: “Little by little. There’s a lot of them that you didn’t realize that you somewhat instinctively know and then just every rehearsal – there’s been about 20 rehearsals, something like that. So that way, if I really screw up, they can really blame me for that, because I did have good rehearsals.”

NME: Of all the songs, do you have a favourite to perform?

Axl: “Right now it’s Hells Bells because it’s the hardest song I’ve ever had to sing and it was the big challenge. So right now I have a lot of fun when I get it.”

NME: Is it true you auditioned a singer from an AC/DC tribute band to front the group for these dates?

NME: You gave everyone a fair chance.

Axl: “And then when they didn’t show up for some reason again…”

Angus: “He was in the alleyway!”

NME: What’s the latest with Phil [Rudd, former drummer who was arrested for threatening to kill a former employee last year]?

Angus: “Phil I haven’t heard from. He’s been very quiet of late.”

Axl: “I’ve talked to him about these other singers, though!”

NME: Have you seen the Bon Scott [former frontman who died in 1980] statue that’s just been unveiled in Scotland?

Angus: “I’ve not, no. I always check first with his family. We always keep in contact with his family, because sometimes things are done and they’ve not been informed and some people use their name and they’ve just not been told. They’ve been unhappy with a lot of things that have gone down, people have done stuff and ignored their wishes.”