AC/DC frontman Brian Johnson has revealed the band has completed work on the follow-up to Black Ice.

The Geordie hero returned to his hometown of Newcastle to pick up his Doctorate in Music from the city’s Northumbria University and he confirmed AC/DC’s new album is done following a series of quickfire recording sessions in Vancouver.

The 66-year-old says: “It was brilliant over there. We’re done. I’m very excited and we’ve got some great songs.”

But Johnson admitted the continued absence of founder member Malcolm Young had cast a shadow over the band’s latest stint in the studio.

He adds: “We miss Malcolm obviously. He’s a fighter. He’s in hospital but he’s a fighter. We’ve got our fingers crossed that he’ll get strong again. Stevie, Malcolm’s nephew, was magnificent, but when you’re recording with this thing hanging over you and your work mate isn’t well, it’s difficult. But I’m sure he was rooting for us. He’s such a strong man. He’s a small guy but he’s very strong. He’s proud and he’s very private so we can’t say too much. But fingers crossed he’ll be back.”

Johnson admitted the band had discussed a number of album titles with the new release due to hit stores later this year or early 2015.

And he added: “I wanted to call the album Man Down. But it’s a bit negative and it was probably just straight from the heart. I like that.”

Johnson received his honorary degree from Northumbria University’s vice chancellor Prof Andrew Wathey, who says: “Brian has been an inspiration to the people of the North East and rock fans the world over.

“His ambition, dedication and talent is second to none. His passion for excellence has propelled the boy from Dunston to the top of the rock world.”

AC/DC are readying a world tour. 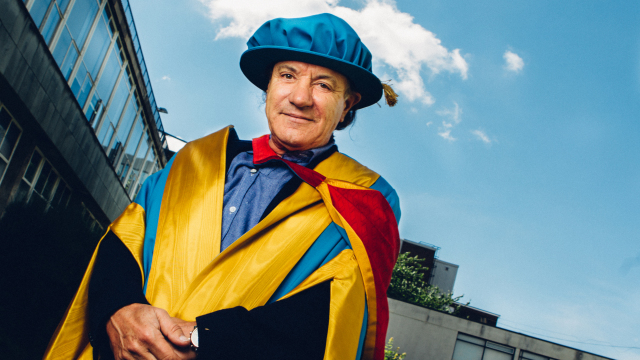