Young was celebrated as a “generous” man with “immense talent.” The 64-year-old died earlier this month after suffering dementia and other health issues for several years, having retired from the band he co-founded in 2014.

The traditional Catholic funeral took place at St Mary’s Cathedral in Sydney, Australia. Among the many family, friends and fans who attended were Australian rock singers Jimmy Barnes and Angry Anderson.

Young’s 1963 Gretch guitar, known as “The Beast,” was placed on his coffin in the cathedral. Guests were given a memorial booklet which included a black guitar pick, with one side featuring the letters “M” and “Y,” split by the AC/DC thunderbolt graphic, and the other carrying Young’s birth and death dates of Jan. 6, 1953 and Nov. 18, 2017.

“Malcolm’s family thank you for your love, support and overwhelming outpouring of kindness during this time,” a statement in the booklet read. “They ask that you remember Malcolm as a man who was generous and had immense talent. His enormous legacy to his family and music industry worldwide will never be forgotten.”

While no one from the family spoke during the funeral, 9 News reported that friends offered some lighthearted memories of Young, including his passion for boating – even though he was apparently never very good at it, and kept losing anchors at sea.

One observed that “not since Jaws were people so afraid of going into the water.” Another recalled a clothes shopping trip that ended as soon as Young had bought two pairs of jeans and six black t-shirts.

Lead guitarist Angus Young carried his elder brother’s guitar from the church as the coffin was placed in a hearse, with no flowers or notices other than the nameplate on the top of the casket. The cortege was led by the Scots College Pipes and Drums Band, who played a medley including AC/DC classic It’s A Long Way to the Top (If You Wanna Rock ’n’ Roll). A private family burial followed the service.

“He loved spending time with his family,” friend Bradley Horsburgh told ABC. “Malcolm has left us all too soon – but the spark of his talent will live on forever.” 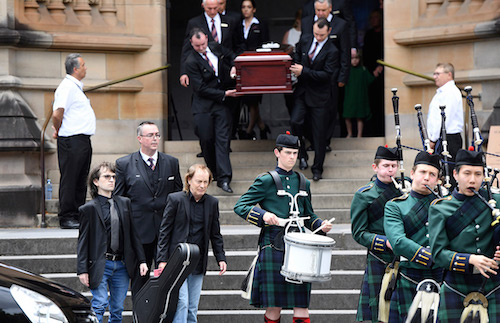