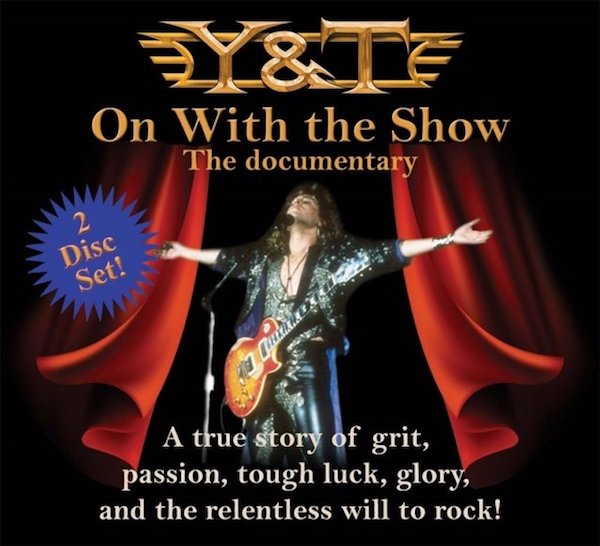 Y&T‘s long-awaited documentary, Y&T: On With The Show – The Documentary  will be released on DVD on November 26th and on Blu-ray on December 31st.

This documentary, narrated by Eddie Trunk and told by frontman Dave Meniketti, along with interviews of past and present bandmembers, will tell the great story that is Y&T by the guys who lived it. From the days of rehearsing in the front room at drummer Leonard Haze’s grandmother’s house in Oakland, California, to the present day celebrating over 40 years, you’ll hear about: the early days touring with their Volkswagen van and a pickup truck, the crazy stories of recording the first two Yesterday & Today albums, meeting Bill Grahamand opening for Journey, Boston and Queen, the band’s big breaks recording and touring overseas, being on the road with AC/DC, Ozzy Osbourne and Dio, the short-lived breakup in the early ’90s, the reformation three years later, a tribute to bassist Phil Kennemore, and much more.

The band has hundreds of hours of never-before-seen personal footage, concert clips, interviews, and thousands of personal pictures to sift through that will visually take you through the journey that they traveled. There will be rare footage and audio clips of performances old and new, from the band’s first shows to the legendary concerts and festivals. Also interviews with rock star celebrities from the many bands who have worked with and were influenced by Y&T, including Don Dokken (Dokken), Dee Snider (Twisted Sister), Sammy Hagar (Van Halen, Montrose), Eric Martin (Mr. Big) and the members of Anvil, plus great stories from the band’s producers, engineers and roadies over the years.

The two-disc set includes the actual documentary (143 minutes) with eight deleted scenes, plus an “Encore” disc (137 minutes) with nine special featurettes — for a total of nearly five hours of material.

Please note: The DVD was manufactured as “All Regions” so it should play in your DVD player; if you encounter any issues in your country or with your player (older DVD players may pose problems), then you can watch it on a computer, which is not region-specific.

A trailer for On With The Show is available below.

‹ COHEED AND CAMBRIA AND SIXTHMAN PARTNER FOR THEIR INAUGURAL CRUISE, WITH SPECIAL GUESTS TAKING BACK SUNDAY, SETS SAIL OCTOBER 26TH-30TH