WATCH “THE UKES OF HAZZARD” COVER METALLICA’S “ONE” 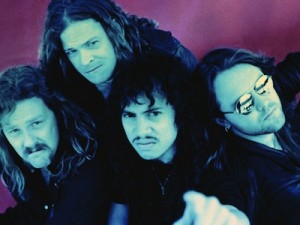 Below, check out an all-ukulele cover of Metallica’s One. It’s performed by a guy who calls his project “Ukes of Hazzard.”

“This was by far the most difficult cover I’ve done,” he says on YouTube. “It’s long, it’s intricate and devilishly fast at the end. The whole process of tabbing, learning, playing and finally editing this monstrosity took me the better part of two weeks. I’m pretty pleased with the final result. There’re still a few bits I wish I’d played a little cleaner.

“Full disclosure: I actually couldn’t pull off a clean take of the main solo, no matter how hard I tried. By the time I realized this, I had already put a lot of work into the rest of the song, so I decided to record it at 80 percent and speed it back up in post, rather than shelve the song. A cheat, for sure, but the song sounds better for it. Plus I’ve heard that Kirk Hammett has done the same thing on a few Metallica albums, so I don’t feel too bad.”

Note that Mr. “Ukes” is playing every part of the song—including bass, drums and the vocal melody—on a ukulele, and you can see him playing the various parts as the video progresses.

[Dana’s note: Thanks to Harry Taint for sharing this link with us]