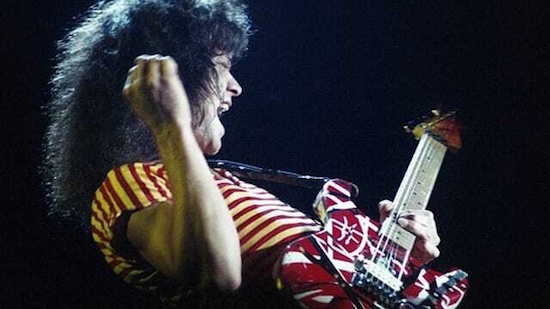 Tolinski explained how it was probably not just a happy accident concerning how Van Halen came up with the seminal design on his Frankenstrat. The first possible inspiration stretches back to where the Van Halen brothers original hail from. “How he actually came up with the actual idea…I have a few ideas about it. One is – which is interesting to me, and if it’s true then it was a subconscious kind of thing – there is a movement of art and design called De Stijl, that actually started in Holland in the Netherlands.”

“And there were artists like [Piet] Mondrian who became hugely celebrated. And De Stijl is basically these paintings that were created by using primary colors at hard angles. Some of the art was just red squares on white backgrounds or black stripes. But if you go look at these De Stijl paintings, you’ll immediately get the vibe of Ed’s guitar. So, to me, that was sort of a fascinating thing. Because Ed lived in Holland until he was seven or eight, there was no way he didn’t see that as part of the Dutch culture – this painting and this art. So, I think some of the inspiration and aesthetic of that guitar just comes from that.”

Secondly, Tolinski theorizes the influence of the Van Halen family’s relocation to California when Eddie and Alex Van Halen were still children played a part, as well. “I think another interesting and cool thing is that he grew up in Pasadena, right? Pasadena was a huge center for hot rods – for making hot rods and making custom cars. There were kids literally working on their front lawns with their cars – spray-painting hot rods, pinstriping them themselves. All kinds of things.”

“And I think Ed, also – maybe not consciously – he was a car freak, so definitely he was aware of this. Maybe the whole notion of taking your guitar and ‘hot rodding it,’ and painting it and rearranging it…he would see these kids all over the place, taking their cars and modifying them – pulling out exhaust pipes and putting new ones in, or changing the tires or the engine, or repainting them. Doesn’t that sound familiar to you? Doesn’t that sound like what Ed was doing with his guitar? So, I can’t help but think that in the whole process of creating your own guitar, it might have come from being exposed to the Pasadena and LA hot rod culture. I believe that there’s something to do with that…”

…”And then, finally, I don’t know what to think of this but it’s an interesting story – we touch on this in Eruption – but right around the time Ed was creating his guitar, he, Al, and Dave would go to the clubs in LA. And they sort of dug punk rock. They were curious at least.”

You always hear that Ed said, ‘Well, Ain’t Talkin’ ‘Bout Love was a tribute to our version of a punk rock song.’ And they even went to I think it was the Whisky dressed up as punks one night. And there was this band playing at the time called the Dils. And the guitarist of the Dils [Chip Kinman] had a white Les Paul, and he decorated it with black electrical tape. If you see pictures of him and you see the guitar, you’ll see it immediately as something that was not quite as interesting or as dimensional as what Ed did, but very similar. And Van Halen did see the Dils.”

“So, it could be a weird combination of all those things. Like, something about what the Dils guitarist did might have appealed to him, and maybe it got triggered by the De Stijl paintings that he saw as a child, and mixed with a little bit of Pasadena hot rod culture. For Ed himself, he would just say he thought it was a cool idea.”

“I never saw him draw anything, so I don’t think he was a painter or anything. But it was something he could do – stripes. It’s something he could make to jazz up his guitar – he clearly wanted it to look different, sound different, and feel different. So, I don’t know where it came from exactly and Ed would be incredibly vague about it – because I don’t think he took it directly from anything. But if you take all of these elements and combine them together, you probably have something close to where he got it.”