TESLA BASSIST BRIAN WHEAT ON HIS STRUGGLE WITH BODY IMAGE, “I STARTED STICKING MY FINGERS DOWN MY THROAT TO KEEP MYSELF FROM GAINING WEIGHT” 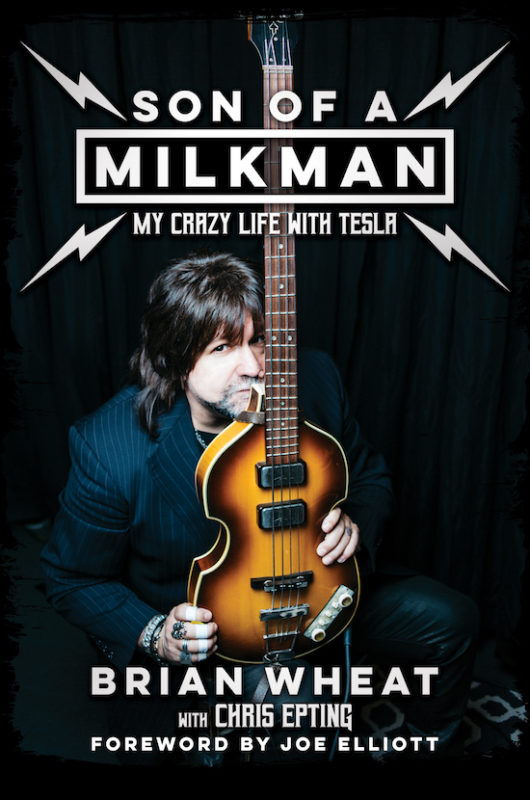 As previously reported, Tesla bassist Brian Wheat’s new book, Son of a Milkman: My Crazy Life with Tesla, will be released on December 15th through Post Hill Press. Reuben Mosqueda of KNAC.com spoke with Wheat about his forthcoming autobiography, his ongoing battle with anxiety, depression and body image, among other topics, highlights of the interview appear below.

KNAC.com: When did you make the commitment to write Son of A Milkman? What was the length of time that you spent working on this book?

Brian Wheat: It was a total of about five years in the making. I wanted to write a book that was honest and that laid it all out there for people. It’s not ‘very rock ‘n’ roll’ because it’s not a rock ‘n’ roll book. [laughs] I wasn’t interested in writing a book about all these chicks that I f–ked and all the drugs that I used. I wanted people to know that I’m like them, I suffer from everyday stuff like the guy that works at WalMart does. I have health issues, mental health issues, self-esteem issues.

KNAC.com:…You shared about your childhood, health and your challenges with depression and anxiety disorder. Was writing [the book] therapeutic for you? Did you have to go through rewrites, because perhaps you thought you shared stuff that was too personal?

Brian Wheat: It was therapeutic for me. I think me writing this book was part of my therapy to tell you the truth…it did liberate me to some extent. It was so good to let go of all of these things that I have been holding inside for all of these years. I think there were a couple of things that I changed or took out because it might have been a bit too personal, but I didn’t have to change too much…I wanted it to read just like an interview, like a chronological interview…There were things that were rewritten or were changed once I sat down with Chris [Epstien who is a professional writer] and we started working on the draft. I might have softened up my stance on something or I might have felt in some instances where I might have needed to make more of a point on something.

KNAC.com: How do you handle an anxiety attack while onstage? You talked about having a difficult time on the tour with Def Leppard in 2019. What are some coping skills that you have developed?

Brian Wheat: It is in how you cope with it. Like you said, we were on tour last year with Def Leppard across Canada. Every night we play to sold-out arenas to 15-20 thousand people. I’m having anxiety attacks every night. There I am on stage coping through it by telling myself ”I have to get through the set.” Then my mind is racing and I tell myself “I can’t forget the set.” I’m going all these different directions. It was unsettling because it was the most unfocused that I have ever been on a tour in my whole career. I found myself asking “Why now? Why at this point in my career? Things should be amazing at this point.” There I was still struggling with this anxiety and these attacks followed by this depression. You learn to cope with it and that was one of the benefits of the therapy. Dr. Herschkopf helped me deal with it on my own with self-talk and talk myself off the ledge. That’s what you do because your mind does all of these things simultaneously while you’re trying to play Little Suzi on stage. [laughs].

KNAC.com: You spent some time with the late, great [Soundgarden frontman] Chris Cornell, who as we know lost his battle with mental health disorder and possibly substance [abuse]. What did you take away from your time with Chris? He opened up to you about it and you didn’t know him that well at the time?

Brian Wheat: Ross Halfin, my friend who is a famous rock photographer was going out to do a photo session with Chris. I happened to be out in L.A. hanging out with Ross. I had my car with me and he asked if I would drive us around to some places to get some shots. Ross was in the back seat and Chris was in the passenger seat. We were driving around and Chris and I started talking, just general chit-chat about this, that or the other. Somehow we got on the topic of anxiety attacks. Chris said, “I get these panic attacks.” I was like, “I get them too. I have had them since I was 14 years old.” We shared stories about our anxiety and panic attacks and I never saw him after that. It wasn’t too long after that he committed suicide and died. It was a real drag because I was a fan of his. I love his music and he [was] an amazing singer. He was the only guy that I had met that had anxiety attacks, because it isn’t very rock ‘n’ roll.

KNAC.com:  You spoke about the impact that his death had on you. You also mentioned the [Linkin Park frontman] Chester Bennington and [Chef} Anthony Bourdain deaths.

Brian Wheat: The point I was trying to make there with Anthony Bourdain, Chris and Chester is that they passed close to the same time. I don’t understand how things can be so bad that someone could take their own life. I have anxiety and I have been depressed, but I couldn’t understand that level of depression until I was on tour in the summer of 2019 with Def Leppard. I was so overwhelmed by that depression. I want to be crystal clear, I have never thought about suicide. It’s never been on the table, but I finally did understand how it could be so overwhelming for someone that suicide would be their only way out.

KNAC.com: You spoke candidly about struggling with your self image which has been attributed to struggles with weight that lead to an eating disorder. Guys have these issues, it’s something that isn’t talked about. It’s like it’s a “woman’s thing.” There was a statement you made where you wanted to bust out your best Pete Way [UFO] moves, but elected to hang back by the drum riser instead.

Brian Wheat: Yeah, people think that those things are exclusive to supermodels or something but it’s not. The fact of the matter is I was a fat kid. I lost all of this weight. If you look at the photos of me during the Mechanical Resonance album I was a fat kid, then I lost a lot of weight. To be able to maintain that…we were out during that time where everyone was looking for that image and MTV was huge. I started sticking my fingers down my throat to keep myself from gaining weight. I did that for 3-4 years. It was during ‘88, ‘89, ‘90 and ‘91 that entire time period. I know what this is like and that’s a slippery f–king slope. I haven’t done that in years. I’m heavier now, of course but that’s due to my autoimmune disease. I have taken Prednisone regularly. It’s hard to be thin and take Prednisone at the same time. It’s a steroid that puts a lot of weight on you, it bloats you among other things. My weight fluxuates. Today I’m more comfortable in my own skin. I want the guy or the girl in Des Moines, Iowa to read this and know that I’m just like them, they can overcome it and there are other people that are experiencing the same problems. This isn’t a gender thing, it happens to all of us. And I wanted to be Pete Way so bad. He was the best and baddest, bass player there ever was. [laughs].

KNAC.com: You wrote about The Beatles having a huge impact on you as a kid, specifically Paul McCartney. In fact, Let It Be was the first album that you bought with your money. You play a violin style bass because of him. When you met him, how did you not get tongue tied and become a total ‘fanboy’ at that point? I love the story in the book of the first time you met the guy. It was all hand signals.

Brian Wheat: The Beatles were everything. I’m still of the belief to this day that on the 8th day God created The Beatles. To me they are right up there with God. [laughs] I’m such a huge fan of their work. Like you said I’m especially fond of Paul McCartney. They are still very important in my life to this day. I don’t think there isn’t a day that doesn’t go by that I don’t listen to The Beatles. There’s alway some thought related to The Beatles or some reference to The Beatles everyday of my life [laughs] somewhere throughout the course of the day. When I met Paul the first time I was freaking out inside, but I was trying to keep my composure! [laughs] I don’t know how I kept it together to tell you the truth. I guess I just rose above it? I still have to pinch myself because I can’t believe I was able to have an intelligent conversation with him. [laughs] That was pretty f–king cool man. [laughs] I’m a pretty lucky guy to have met my hero or to have met several of my heroes. I’m blessed.

To find out more details about Son of a Milkman: My Crazy Life with Tesla, please click here and to pre-order the book go here.