STRYPER TO RELEASE NEW ALBUM “EVEN THE DEVIL BELIEVES” ON SEPTEMBER 4TH; LYRIC VIDEO FOR NEW SINGLE “BLOOD FROM ABOVE” AVAILABLE FOR STREAMING 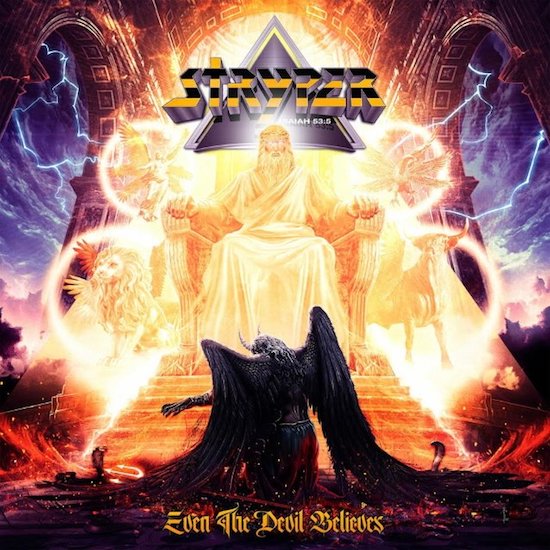 The official lyric video for Blood From Above, the new single from openly Christian hard rockers Stryper, can be seem below. The song is taken from the band’s forthcoming album, Even The Devil Believes, which will be released on September 4th through Frontiers Music Srl.

“We’re incredibly happy to write a new chapter in the book of Stryper,” says vocalist/guitarist Michael Sweet, who has served as the band’s primary songwriter since its inception in 1983. “This album was recorded during the pandemic, and I believe the message pertains to the times we are living in so perfectly. It’s a recording of hope and inspiration and a light in the darkest of times.”

Sweet, who also produced the new album, revealed that the band members delivered focused determination, a collaborative spirit and spot-on execution for the new record. The result is a collection of remarkable songs that will leave a strong impact on listeners.

“It has an energy unlike any other album we’ve done,” he asserts. “We even pulled a song from the past that has never been heard or released, and by doing so we brought a little bit of 1989 back into the mix.”

Standout tracks include Blood From Above, Make Love Great Again, Do Unto Others, How To Fly, Divider and the heart-stirring ballad This I Pray.

“The music and lyrics are rock-solid,” says Sweet. “God really blessed this one and hopefully it will bless everyone who hears it as well.”

Even The Devil Believes track listing:

Formed 37 years ago, Stryper is the first overtly Christian metal band to go mainstream. The group’s name comes from Isaiah 53:5, which states, “But he was wounded for our transgressions, he was bruised for our iniquities: the chastisement of our peace was upon him; and with his stripes we are healed.”

Stryper’s albums include To Hell With The Devil, Second Coming, No More Hell To Pay, Fallen and God Damn Evil.