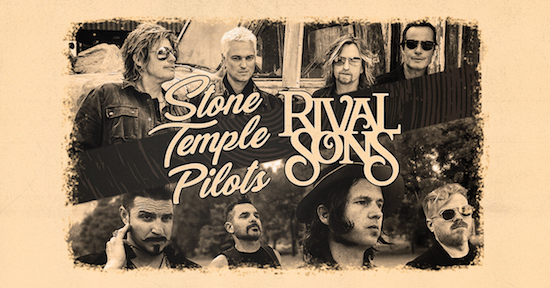 Stone Temple Pilots and Rival Sons – announced they will embark on their first ever co-headlining U.S. tour this fall. Produced by Live Nation, the exclusive 12-city outing will begin September 13th in Baltimore and see the two bands performing on intimate stages across the states including The Met Philadelphia, Ford Amphitheater in New York City, The Fillmore New Orleans and more, before wrapping October 9th in San Diego. Please see full itinerary below.

Tickets go on sale to the general public beginning today at 12pm local time at LiveNation.com.

Stone Temple Pilots and Rival Sons will join forces for the first time ever on what is sure to be an unforgettable run of dates through September and October.  Dean DeLeo of STP says, “We are thrilled about this tour and grateful to share these upcoming shows with Rival Sons. A great band! They don’t make them like this anymore. Looking forward to seeing all of you.”

The tour will include full sets from each band bringing an unforgettable show fans would only expect from two of the best live bands in music today. “We’re delighted to share the stage with the DeLeo brothers and STP. Not to mention performing together in some really great venues,” says Scott Holiday of Rival Sons. “These guys wrote some of the soundtrack to my childhood…and it’ll be killer to watch and listen to ‘em hit these gems every night.”

5/2: HEADED TO LA. SAMMY HAGAR AND THE CIRCLE & MORE LIVE FROM LA THIS MONDAY, RIDE FOR RONNIE IS SUNDAY ›