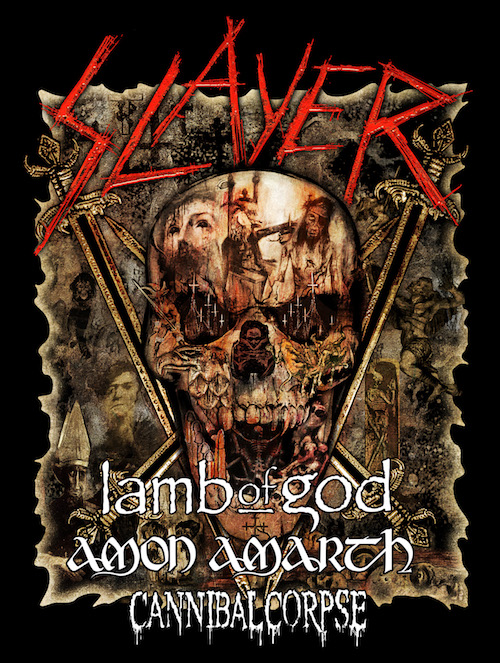 With Leg Three of Slayer’s Final World Tour having wrapped up this past Saturday, dates in Australia, Japan, the South Pacific, and the final European dates announced in the past weeks, today Slayer announces Leg Five: North America of its Final World Tour.

Maintaining the band’s ethos of “play as many places as possible to make it easier for everyone to see the band one last time,” Leg Five will begin May 2nd the Ak-Chin Amphitheatre in Phoenix AZ and see the band performing 16 shows across the Southern states and then up the east coast, culminating at the Xfinity Center Amphitheatre in Mansfield, MA on May 25th. Lamb of God, Amon Amarth and Cannibal Corpse will support Slayer on all Leg Five dates. Special Slayer VIP Packages will be available for all dates; those details are accessible here.

Also today, Episode 3 of Slayer Looks Back on 37 Years video interview series is released. Tom Araya and Kerry King talk about getting their first record deal and the release of Show No Mercy; Tom, Kerry and Paul Bostaph remember Paul’s first meeting with the band and his subsequent audition to be Slayer’s drummer. Check out the clip, below.

With still more dates coming – it’s a big world and it takes time to transverse it – confirmed 2019 dates for Slayer’s Final World Tour are as follows: