In support of Repentless, the band’s 12th studio album and its career-highest chart debut, Slayer will launch 2016 by pillaging and marauding its way across North America, headlining some two-dozen dates over a five-week period. With Special Guests Testament and Carcass on all dates, the tour starts on February 19th in Chicago and wraps up in Las Vegas on March 26th. Confirmed dates are below. Slayer’s Fan Club pre-sale begins today at 12 noon local time, details are slatanicwehrmacht.com. Ticket presales begin tomorrow, Friday, December 4th at 10AM local time, and the public on sale commences Saturday, December 5th at 10AM local time.

For this tour, Slayer is offering several different limited-availability VIP packages that will include premiums such as watching Slayer’s entrance and first three songs from right onstage, access to the band’s normally off-limits soundcheck, autographed collectibles, and a variety of custom VIP swag. Log onto Slayer’s Facebook for all VIP packages and ticketing details.

Twenty-fifteen has proven to be a pretty darned good year for Slayer. Ignoring the odds and naysayers, the band – Kerry King/guitars, Tom Araya/bass, vocals, Paul Bostaph/drums, and touring guitarist Gary Holt – wrote, recorded and released its first album since the death of founding member, guitarist Jeff Hanneman, and first with producer Terry Date. As a member of The Big Four, Slayer didn’t just help define the thrash-metal genre, Slayer defines an attitude.

For this upcoming tour, fans can expect to hear many of their favorite Slayer songs selected from the band’s 30-plus year discography, as well as a few of the brand new ones. As the Austin Chronicle put it about one of Slayer’s recent shows, “[It was] one hundred minutes of just plain pummel…the group delivered fast, hard, no-frills bludgeon.”

With more dates to be announced, the first leg of Slayer’s 2016 North American tour is as follows: 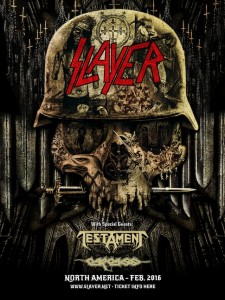