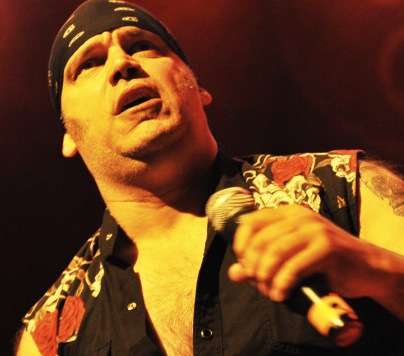 Songfacts: Looking back, how would you say that you write your best songs?

Blaze Bayley: I’m not sure if this is the best way, but what I’ve tried to do is gather together enough interesting words that could be lyrics or titles, and I try and gather together melodies. When things pop into my head, I put them on my dictaphone or record them somewhere.

What I’ll try and do is have a book with at least 30 ideas for lyrics for songs. Then I’ll sit down with a guitarist or I’ll sit down at my keyboard and I’ll start coming up with things and we’ll try very hard to match the lyric to the emotion of the music. And that’s the way I feel it’s best for me. What I’m searching for is those moments where the music and the lyric are totally together and they’re like one thing. It’s not the words on the music, it’s one thing. Those are the most triumphant moments, and I’ve had a couple of those. Stare at the Sun from the Silicon Messiah album. That fits together so well, the lyrics and the music, much by accident. So that’s what I’m trying to do, really. But I never say I only do things this way. Sometimes, somebody I’m working with will come up with a couple of riffs on the guitar, and it might nudge me in a direction and I can come up with a new lyric very quickly that I’m pleased with.

And other times, it’s work and it’s using my technique and it’s okay. Sometimes it’s hours and hours of fiddling around with things and catching syllables and repeating and repeating to get things to make sense and actually fit together. And if you’re lucky, then you get a real result. So that’s the way I generally approach it.

I don’t cut anything off. Before I get in and start looking for the songs for a new studio album project, I like to have a lot of lyrics available, a lot of ideas for words. That’s when I feel most comfortable and relaxed, and I try to match up those words with the music. But, you know, they sometimes start with the music first and I’ll just come up with the lyrics.

It’s crafting it like a sculpture. I think of it like a sculpture: If you get the block of stone, contained within that is something beautiful, so you want to take away enough to leave what’s beautiful, and you don’t want to take away too much. You don’t want to work on it too much so that the beauty becomes small and ineffective, because it’s not big and majestic anymore.

Songfacts: How would you describe how the songwriting worked in Iron Maiden?

Blaze: Well, that’s where I learned so much from Steve Harris. He’s just great. No music was written before I started recording The X Factor, so Steve said, “I don’t care who has the ideas that go on the album, they’ve just got to be great ideas.”

So, it doesn’t matter who writes the song, it just has to be a great song. That’s reassuring. I got quite a few of my ideas onto a work with Steve or with Janick Gers that became part of The X Factor. The first single from The X Factor was my lyrics for Man on the Edge.

In some situations, Steve likes to come along with a completed idea – he’ll have something in his mind that he really wants a certain way. I’ve learned since working with Steve a lot more about how to get that idea from your mind into the recording and into the arrangement. Whereas before, it would be very hit-and-miss. “Why didn’t this idea turn out so well and that one did? And why didn’t this song sound anything like my idea and this one did?” Working with Steve Harris and seeing the way he puts things together, that really helped.

And the other thing is self-censorship. There’s not a lot of second guessing with Iron Maiden. It’s, “Does this feel good? Does this make sense? Does this move you?” Then “It’s good, that’s it.” We don’t think about it anymore, we’ll do it. Generally speaking, it’s trusting your instincts and your gut feeling. Working in Iron Maiden gave me so much confidence, because things that I thought were right actually were right, and things that I wasn’t quite sure of didn’t make it.

I came up with Man on the Edge, I thought it was a very good idea. Steve said, “Yes, this is a good idea.” So that’s a huge boost from someone who’s written some of the all-time classic songs.

When I worked on one of the ones that we did together, The Edge of Darkness, which is based on the Apocalypse Now movie, it didn’t really have a chorus as such. Well, there’s quite a few Iron Maiden songs that don’t have conventional chorus or conventional fallouts, but they make sense as musical pieces. We call them “songs” as a convenient name. That was a big part of the experience in Iron Maiden.

So there’s a collaborative thing there, which we did on Virus. And I collaborated with Steve on Futureal and another couple of songs. There’s also en element of, “Bring in something that’s done and see what people make of it and if it’s good enough to get everybody’s attention and make them feel good.” So that’s what it was like.

One of the sadnesses of my life, a twinge of sadness, is I was working on the lyrics and melodies for a third Iron Maiden album when they fired me. So a lot of those ideas that I was going to use on a third Iron Maiden album are actually on my Silicon Messiah album: Stare at the Sun, Ghost in the Machine, Born as a Stranger, The Launch. A lot of the ideas I’d already got on my dictaphone or got lyrics sketched out, then I didn’t get the chance to work with the guys.

But I’m so proud of my Silicon Messiah album. It turned out great. I put that level of satisfaction that I have with that to the experience I had with Iron Maiden songwriting and with everything I learned there. I never doubted myself after that like I may have done before. Now if I feel it’s good, I’ll follow that idea through.

ACE FRHELEY ON TOMMY THAYER: “HE’S JUST A GUY UP THERE COPYING ME” ›