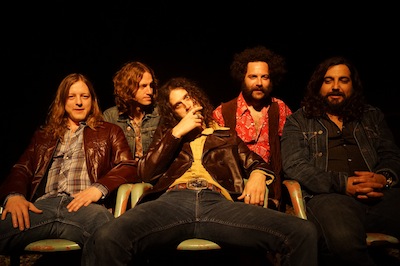 Fresh off the just-completed Rockstar Mayhem festival circuit which took them to 17 different U.S. states & Canada, Austin rockers Scorpion Child are set to heat up the last days of summer with a headlining tour this September/October with direct support from labelmates Kadavar from Germany plus Gypsyhawk from Los Angeles, Wilson from Detroit (select dates), and openers Mothership from Dallas, Texas.

Scorpion Child will perform a one-hour plus headlining set featuring music from their self-titled debut album, which landed at the number 26 slot on the Billboard Heatseekers chart and number 99 on the Hard Music Album chart the week following its June 25th release.

Checking in from their rehearsal space in Texas, the band shares:

“We met a LOT of new supporters while we were out on Rockstar Mayhem and the time has come for The Child – along with friends Kadavar, Gypsyhawk, Wilson, and Mothership-to deliver you hours of unforgettable sonics making this roadshow one of legendary modern day proportion. Together we ask you to join us in creating this epic segment in history. Come one, come all!!!”

Scorpion Child and Kadavar will make a festival appearance at the Snowboard On The Block Festival in Denver, Colorado on Saturday, September 14th prior to the tour launch in Chicago, Illinois on September 16th. The 15 date tour ends on Saturday, October 5th a mere 2 hours away from where Woodstock was held back in 1969: Brooklyn, New York.

Praised for their “old school spirit, kick-ass hard rock, killer riffs and vocals… a band worth watching & listening to!” by radio & television personality Eddie Trunk, Scorpion Child’s music has been played on Eddie Trunk’s live show on SiriusXM satellite radio and on Nights with Alice Cooper.

Dates for Scorpion Child’s headlining tour with Kadavar, Gypsyhawk, Wilson, and Mothership are:

Watch the videos for Liquor and Polygon Of Eyes below.