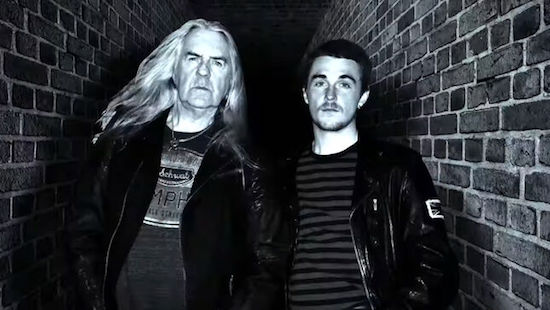 Greg Prato of Bravewords spoke with Saxon frontman Biff Byford, and his son Seb, about their new side band, Heavy Water, and their debut album, Red Brick City. Excerpts from the interview appear below.

BraveWords: How did the idea come up to do a band together?

Seb Byford: Over lockdown, I spent a lot of time at home. I had a flat in Manchester at the time, and it was pretty heavy there – being stuck there during lockdown in a big city. So, I headed home, and obviously me and dad had a lot of free time – because he wasn’t touring, and I had no shows or anything. We’ve got a studio around back in one of the barns, and we just thought, “Why not make some music?” We started to write some songs together and put together some riffs we had. We thought it sounded pretty cool, so we thought we could release an album and do something with it.

BraveWords: Musically, bands like Sabbath and Soundgarden come to mind, as well as blues-based rock – is that a fair assessment of the band’s sound?

Seb Byford: Yeah. I’m a big fan of the ‘90s grunge stuff – like Soundgarden, Pearl Jam, Nirvana, Rage Against the Machine, Audioslave, and stuff a bit later on. So, I think definitely riff-wise and maybe some vocal melodies. It’s a mix – it’s more ‘70s classic rock stuff, grunge, and a bit more of the psychedelic stuff.

BraveWords: How is it determined who sings lead on specific songs?

Biff Byford: I think the bluesy elements of it that you’re probably picking up on – the Red Brick City riff and Medicine Man– they’re more “groove heavy” than say, Saxon are or any of the ancient metal bands. It’s really enjoyable to do, and I think it’s a great rock album.

BraveWords: Biff, you also play bass on the album, right?

Biff Byford: Yeah. I was playing bass when I was in my twenties. So, I’ve played bass for a long time. I was in a band with Paul Quinn and I played bass – it was a three-piece jamming band. So yeah, I’ve played bass half of my life, really. I’m used to bass. I had a Rickenbacker back in the ‘70s, and I’ve still got a Rickenbacker now – from 1974. It’s not as hard work…unless you’re going to be Billy Sheehan or someone like that, then obviously, it’s very hard work. But I just lay back and play the groove.

BraveWords: Biff, at what point when Seb was growing up did you realize he had musical talent?

Biff Byford: Very early on, actually. When we lived in France – because we lived in France for about eight years – the school that he was at in France, they had an English music teacher. He said he wanted to play drums, so he played drums from a very early age. I think he probably started playing drums from six/seven years old, and then that went from there. He actually got quite high in the grades – grade 8 snare. So, he did a lot of exam work. He played drums in a band in France with his sister on bass, which is pretty cool. Then he switched to guitar.

BraveWords: Future plans beyond this album?

Biff Byford: If people are interested, then we’ll probably do some shows. We can definitely do some shows – I’ll have to practice bass a little bit for that. But we’re thinking about doing another album. People that I’ve talked to seem to like this one and the press seem to like it – a lot of magazines in Europe are doing quite a lot of great reviews. We’ll just see how it goes. And there is a band called Heavy Water, so that will keep going.

BraveWords: And Biff, what is Saxon currently up to?

Biff Byford: Well, the new album is finished, so we’re just waiting for the album cover to be done, and OK that. And then we’re ready to go. I think you’ll be able to order the album in October, and I think it’s coming out in February.