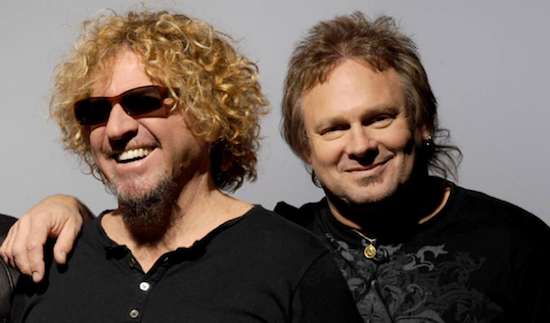 Former Van Halen members Sammy Hagar and Michael Anthony have created Instagram and Facebook pages dedicated to the Hagar era of the band.

The bandmates (Chickenfoot and The Circle), announced the creation of the new social media pages in separate video messages on Wednesday (June 16th).

Hagar said, “Hey everybody, I’ve got some fresh news for you. Mikey and I have been checking out our old vintage footage of stuff we’ve been doing over the years with Van Hagar years and all that, and we found some of the coolest stuff. And we’re digging and we’re digging — we’re finding nuggets every day and we’re gonna share ’em with you.”

Added Anthony, “Hey, everyone keeps asking us, ‘Why don’t you post more of the Van Hagar years stuff?’ Well, guess what. You’ve got it. We’re gonna go through, dig through some of the archived stuff, try to find stuff you haven’t seen before — maybe some stuff that we haven’t seen in decades — and throw it up, and maybe post a couple of comments to go along with it.”

Hagar replaced original Van Halen frontman David Lee Roth in 1985, and recorded four studio albums with the band — 5150, OU812, For Unlawful Carnal Knowledge and Balance — all of which topped the U.S. charts.