Straight into the new year, Rob Zombie announced his participation in this year’s Soundwave Festival, five dates in Australia, before heading for a couple of solo dates in Singapore, China, and two stops in Mexico. Zombie then added a dozen U.S. dates, including a handful of festivals such as Monster Energy’s Carolina Rebellion, Fort Rock and Welcome to Rockville festivals. After their dates in the States, the band will continue on their world tour, hitting Sweden’s Rock Festival, Rock am Ring in Germany, Download Festival in England, Novarock Festival in Austria, Aerodrome Festival in Hungary, Czech Republic, Hellfest in France, Spain, Italy, Switzerland, Netherlands, Denmark, Poland and Finland.

2013 proved to be an amazing year for Rob Zombie. He celebrated his critically acclaimed sixth feature film, The Lords of Salem, that he wrote, directed, and produced, alongside the noted horror team behind Paranormal Activity, in conjunction with Anchor Bay Films. His first book, The Lords of Salem, was inked as a New York Times bestseller. The debut of Rob Zombie’s Great American Nightmare, a 15-date Southern California horror event, in Pomona, CA, was followed by the Night of the Living Dreads co-headline tour with Korn.

Seven-time GRAMMY®Award-nominated rock legend, visionary filmmaker, and author Rob Zombie is supporting his fifth solo album, Venomous Rat Regeneration Vendor, which debuted at number seven on the Billboard Top 200 and is the first release through his very own Zodiac Swan imprint. The record yielded a new arsenal of incendiary, infectious, and irresistible classics including the Top 10 Active Rock singles Dead City Radio and the New Gods of Super Town, and his take on Grand Funk Railroad’s We’re an American Band. 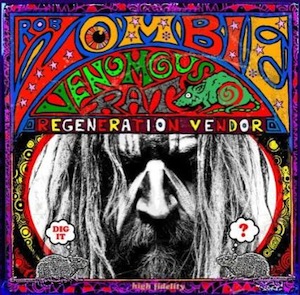