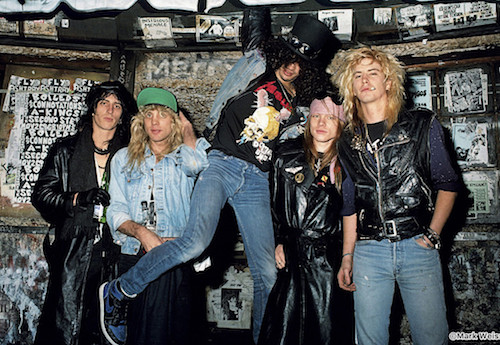 Weiss shot the band for Hit Parader magazine, and stated, “[At the time] No one outside of LA had heard of them. They didn’t even have an album out, but there was a big buzz. They were rehearsing, so we set up a quick little photo shoot, and I remember they didn’t want to do a photo shoot with me or anyone else because they had their own photographer. They had an attitude right out of the gate….”

…”I remember Axl with the glammed-up hair and he had this pair of pants on that said, ‘Glam Sucks,'” Weiss [continued]. “So, it’s kind of a contradiction because he had make-up on and a totally glam look going.”

Weiss concludes, “”The last time I shot them with that original lineup,” says Weiss, “they were at the Sunset Grill in LA. After the shoot, Axl asked if I wanted to make a call on his cell phone. It was the first time I used one.”

Mark Weiss’ book The Decade That Rocked: The Photography of Mark “Weissguy” Weiss is available at thedecadethatrocked.com.