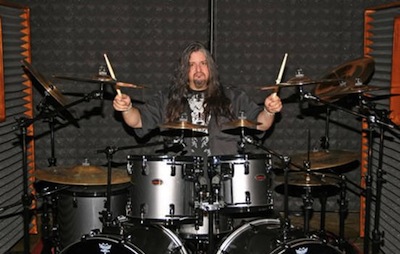 When it comes to playing fast, few can beat Gene “The Human Drum Machine” Hoglan.

“There are young dudes coming up behind me who want to take my throne, but I’m not going to give it up that easy,” says Mr. Hoglan, 46 years old, who warms up with drum sticks twice as heavy as usual, a trick he learned from baseball that makes his normal sticks seem lighter. To tone his legs, crucial for foot-drumming, he wears 3-pound ankle weights. When he pops these off, he can really fly.

Though he weighs nearly 300 pounds and is, in his own words, “really lethargic,” Mr. Hoglan has been called one of the quickest and most precise drummers in heavy metal.

Ever since spinning out of rock ‘n’ roll in the 1970s, metal has gotten faster and faster. Like many drummers of his generation, Mr. Hoglan left the drum-pounding abilities of his heroes in the dust, fueling an arms race that has sparked an unlikely crisis. Speed metal, as this subgenre is called, has become so fast that drummers can’t keep up. Instead, more bands have quietly switched to using computerized drum machines.

How did heavy-metal drumming get so fast?

Ian Christe, author of Sound of the Beast: The Complete Headbanging History of Heavy Metal, says the genre speeded up in the 1980s, when drummers for bands Metallica, Slayer and Testament one-upped older groups by making metal more about fast rhythms than melody.

When new technologies arrived, metal drumming standards entered the realm of the physically impossible. Today, many bands write songs using computers without even rehearsing them.

Some bands say they like the cold, inhuman quality of machine sounds. But the trend raises hackles among purists, because metal aficionados put a premium on authenticity and virtuosity, and sometimes don’t know that they are being duped. Paradoxically, to make drum tracks sound more human, metal producers deliberately introduce mistakes into their own programming. “They cover it up,” Mr. Mynett says. “The idea is to make people think the virtuoso is real.”

Mike Mangini, the 50-year-old drummer for progressive-metal band Dream Theater, used to be the world’s fastest drummer, with a record for hand-drumming of 1,203 b.p.m.—as fast as some hummingbirds beat their wings. He was beaten in Tennessee in July by 23-year-old Tom Grosset at the World’s Fastest Drummer competition, a contest in Nashville founded by Boo McAfee, an inventor of a gizmo called a “Drumometer” that clocks drummers’ speeds.

Some of metal’s elder statesmen are encouraging drummers to slow down.

Dave Lombardo, former drummer of Slayer, has removed the parts of his drum set that once helped him play superfast and thinks today’s metal drummers sound sterile. “They’re missing the whole point,” he says. “You’re going to lose the feeling if you try to achieve [speed] in an artificial way.”

‹ BON JOVI LEADING THE LIST OF HIGHEST-GROSSING TOURS FOR 2013