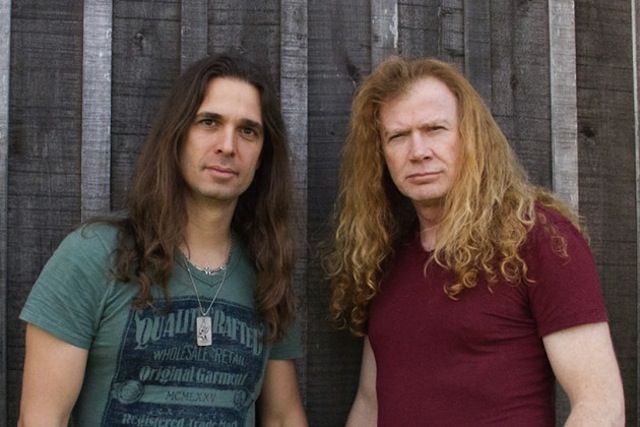 Megadeth has announced their new guitarist and his name Kiko Loureiro from the band Angra. This announcement comes on heels of the band announcing that their new drummer will be Lamb of God‘s Chris Adler.

In a statement posted on Megadeth’s website, frontman Dave Mustaine revealed, “I first met Kiko around 8 years ago for a cover shoot for Burrn! magazine. I had no idea who he was, other than the fact he was tremendously talented and that the staff from Burrn! held him in high regard. Since then I’ve come to see what a guitar virtuoso he is, and I’m deeply encouraged by his depth and talent. Very few Megadeth alumni have had the same feel and ability as Kiko. As Frank Sinatra says, ‘The best is yet to come!’” The statement came with the photo of Mustaine hanging out with Loureiro posted above.

Loureiro’s addition has been rumored heavily in recent weeks, enough so that during a recent performance fans in the audience were reportedly chanting “Megadeth” as he played.

While we’re certain to see Loureiro on the stages when Megadeth resume touring, it’s unclear whether he’ll be joining Mustaine, bassist David Ellefson and Adler in the studio. When the band announced that Adler would be on drums, Mustaine hinted that the group would record as a three-piece. Megadeth will be heading into the studio soon, as Mustaine recently tweeted that the writing process was almost complete.

‹ WILL VAN HALEN EVER RECORD A NEW ALBUM? EDDIE VAN HALEN SAYS, “AFTER THIS TOURING CYCLE, WE WILL PROBABLY HUNKER DOWN AND DO A STUDIO RECORD. WE CERTAINLY HAVE ENOUGH MATERIAL”