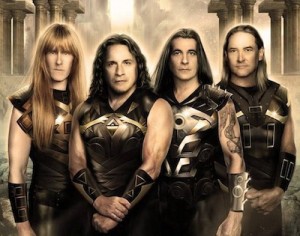 Manowar have confirmed two additional dates for their Gods And Kings World Tour 2016:

These dates not only mark Manowar’s triumphant return to Romania, but also their first ever performance in Cluj-Napoca (commonly known as Cluj), located in the northwestern part of the country, in the historical region of Transylvania.

“The Army of Romanian Manowarriors is growing!” said Joey DeMaio. “It is no secret that Romanian Manowarriors are the most powerful fans in Romania. Anyone who has seen them knows it’s a fact; so our return to Bucharest is like returning home to our Romanian metal family. And for the first time ever we’ll be performing in Transylvania! I’ve personally been to Transylvania many times and I have also been to Cluj several times. You can be sure these shows are going to be very special. Not only for the Manowarriors but for us as well.”

Manowar have revealed the name of their upcoming tour: Their new metal onslaught is titled “Gods And Kings World Tour 2016”.

“In the Manowar universe bigger is better!” said Joey DeMaio. “If you think the Kings Of Metal tour was massive, just imagine what is going to happen when we join forces with the earth-cracking Gods Of War!”

The tour will celebrate Kings Of Metal MMXIV, which many fans haven’t had a chance to experience live yet, as well as the upcoming anniversary of Gods Of War, which was unleashed on the world in 2007.

Along with this announcement Manowar have confirmed a series of additional dates for the first leg of the Gods And Kings World Tour 2016:

We will once again push man, machine and metal beyond all standards.” said MANOWAR. “This tour will be devastating! If you have metal in your veins, you don’t want to miss it!”