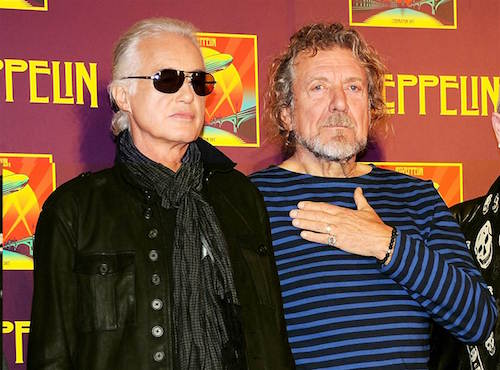 Led Zeppelin guitarist Jimmy Page and singer Robert Plant will attend the Stairway To Heaven copyright trial in the US next month, lawyers have said.

Proceedings are set to commence in California on June 14th. The court will decide whether Led Zeppelin based the opening section of their 1971 anthem on the instrumental piece Taurus by Spirit, which had been released four years earlier.

Action was instigated by the estate of late Spirit guitarist Randy California, who’d always insisted Stairway was lifted from his work. His arguments are presented by lawyer Francis Malofiy, who’s petitioned US District Judge Gary Klausner to compel the pair to attend.

Page and Plant, who deny any wrongdoing, have both recorded video testimonies for the trial. Bassist John Paul Jones was originally included in the lawsuit, but was later removed.

Malofiy wrote in his motion, “Defendants’ refusal to specify if they will appear is causing havoc. Because Defendants are not being clear whether they will attend, Plaintiff is being forced to designate more deposition testimony that he will need if they appear.

This uncertainty is extremely costly as Plaintiff is also having to edit hours of video deposition testimony.”

Led Zeppelin’s lawyers say, “We have previously made it clear that Messrs Page and Plant will attend the trial, but with them coming from England we cannot guarantee the day they will arrive.”

Malofiy accuses the musicians of trying to “dictate the court’s schedule” and says they’re displaying a “lack of common courtesy.” He wants a failure to appear to be officially regarded as a limited admission of guilt.

It’s thought that, if the case is found against Led Zeppelin, it could cost them as much as $40m in settlement payments.

‹ KISS’ PAUL STANLEY ON NIKKI SIXX’S COMMENTS ABOUT GENE SIMMONS, “WHEN SOMEBODY [DENIGRATES] OR TAKE[S] POTSHOTS AT YOUR CONTRIBUTIONS OR YOUR BAND…IT GETS TO BE LUDICROUS”