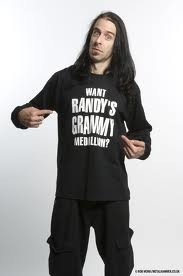 According to the Associated Press a court acquitted on Lamb of God frontman Randy Blythe on March 5th of causing a teenage fan’s death at a concert in the Czech Republic.

Blythe was charged in December in Prague with causing bodily harm to another person with lethal consequences. Blythe was accused of pushing 19-year-old who had climbed onto the stage during a 2010 concert at Prague’s Abaton club. The man hit the floor with his head and later died of a head injury.

Prague’s Municipal court ruled that Blythe was not guilty because what he did was not a crime, court spokeswoman Marketa Puci said.

Blythe, who had pleaded not guilty, acknowledged that he pushed the teenager because the band doesn’t tolerate any fans on the stage, but said he was not aware of any injuries.

In its ruling, the court said it was the concert’s organizers were to blame for the accident, Puci said.

The state prosecutors, who had demanded a five-year prison term for Blythe, said they will appeal the verdict.

Blythe said that the victim – who cannot be named in line with Czech privacy laws while the case still is handled by courts – was a fan of his band and he felt sorry for the loss of life.

The 42-year-old musician was arrested in June when he returned to the Czech Republic for another gig, not realizing that he was being investigated in the Czech Republic. He was released five weeks later on $400,000 bail after a Prague court dismissed a prosecution request that Blythe be banned from leaving the country, fearing he wouldn’t return for the trial.

The relatives of the fan, who are seeking compensation, were told by the court to file a separate case, Puci said.

GEOFF TATE ON HIS FORMER QUEENSRYCHE BANDMATES: “THEY HAVE BASICALLY SLICED THEIR OWN THROAT AND RUBBED THE NAME OF THE BAND IN THE DIRT” ›