L.A. WEEKLY REPORTS: NOW THAT IT’S BEEN CANCELED, CAN “THAT METAL SHOW” FIND A NEW HOME? 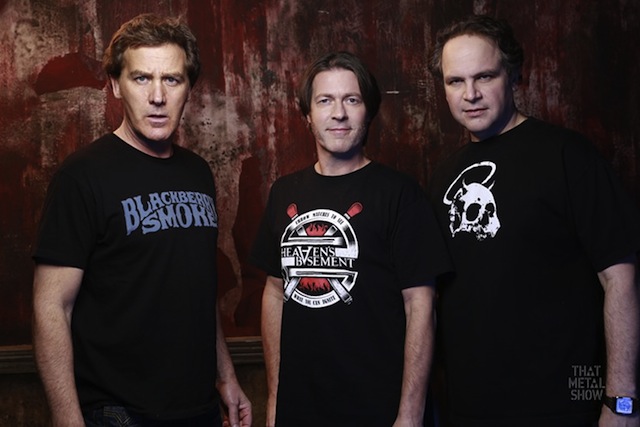 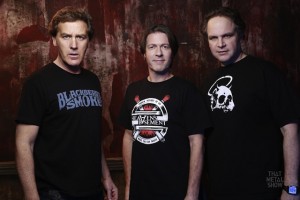 Much like some VHS bootleg of a vintage Judas Priest concert, early on That Metal Show was something headbangers shared with their brethren over a sixer on Saturday nights. Yet a few seasons in, the VH1 Classic program — which in 2008 began beaming classic-metal heroes last heard rocking Fiero stereos into present-day TV audiences’ living rooms — had cracked the mainstream.

The crossover appeal? That Metal Show hosts Eddie Trunk, Jim Florentine and Don Jamieson’s knowledge and love for heavy music makes for consistently compelling interviews, whether their guests can still fill arenas (like Rush virtuoso Geddy Lee) or their stardom has long since faded (various second-tier ’80s pop-metal acts). That Metal Show gave a breed of musicians charismatic enough to have once dominated MTV, before becoming persona non grata during the ’90s, a nationwide platform again.

“At first we didn’t know if anyone was watching or cared,” Jamieson says. “But after a few seasons we really started to hear directly from artists about how much we helped them get a new record deal because they did the show. Or they got another couple of tours out of doing the show.”

But Trunk saw this coming as long ago as mid-2015, when they were wrapping their 14th season, “We started to hear various things from the network around that time, about the possibility of us moving to another channel within their network,” he says. “A lot of different things. And many of the key executives that were involved with That Metal Show slowly started to leave or were replaced, so we knew that obviously was a bad sign. But we also knew we were pretty much the anchor for the entire channel. We had become the big fish in the small pond.”

Whereas VH1 proper is a big, mainstream, well-funded channel, VH1 Classic is the much less bountifully financed little sister. Other VH1 Classic programming is mostly licensed from other sources. In the long run, Trunk says, the channel didn’t seem willing to continue investing in original programming. “It became this problem where people wanted more of it and they didn’t have money to make more of it,” he explains. “So it was very push-pull.”

Still, Trunk is grateful for their eight-year run on VH1 Classic, during which TMS was able to have a studio audience, take good care of guests, feature multicamera work and an increasingly rad set — all things that cost money. (VH1 Classic did not respond to L.A. Weekly’s request for comment.)

…That Metal Show’s hosts all live in New Jersey, and the first four seasons were shot in New York, from 2008 to 2010. Trunk has been an East Coast rock-radio fixture since 1983 and Florentine and Jamieson are stand-up comics based there. The three became friends after Florentine and Jamieson would listen to Trunk’s radio show in New York after their comedy gigs and were psyched to hear someone else out there still jamming to Saxon.

…In 2010, That Metal Show moved to L.A., where many veteran hard-rock and metal artists reside, shooting at a Glendale studio and later at Sony Pictures Studios in Culver City. This had a huge impact on the show, says Trunk, who had a hand in booking the majority of their guests. “It was so much easier to say to somebody, ‘Hey, can you come to Sony?’ or ‘Come to Glendale … we’ll send a car for you.’ It made it so easy we literally could pick and choose.” They’d shoot two episodes a day, putting an entire season in the can after about two weeks.

For the TMS hosts, who came of age in storied East Coast metal clubs like L’Amour, the move gave them a chance to tap into the West Coast’s temples of boom. “There are a ton of metalheads in the Los Angeles area who lived those days on the Sunset Strip,” Florentine says. “Those people still live out there and we started taping the show there and those people started coming out of the woodwork.” Lines to be a part of their L.A. studio audiences wrapped around the block, Jamieson says.

“There was some miscommunication as to why we were there and he apparently wasn’t aware that we were there to interview him,” Jamieson says with a laugh. “So we waited many hours to get the interview done. I think we started at like 5 in the morning. But to get that first Axl Rose [TV] interview in all those years was really important for us.”

…The show will be missed not just by its fans but also by rock and metal musicians. Guitarist John 5, who works with Rob Zombie as well as maintaining a solo instrumental career, has appeared on TMS numerous times. He’s also a huge fan of the show. “There was nothing — nothing — on TV at the time like a rock or metal show, which was like something [from] the past,” he says, speaking by phone from his home in the Sherwood Forest section of Northridge. “It is really sad the show is not going to be on VH1 Classic anymore, because that was our whole outlet. That’s what educated us on what’s happening.” When John 5 meets fans at signings, many of them say they first discovered his music through his That Metal Show appearances.

But there’s hope that That Metal Show hasn’t seen its final days. Producer Jeff Baumgardner cut a deal with VH1 Classic allowing him to take the brand and shop for a new home. “And that’s where we are now,” Jamieson explains. “Obviously you have a lot more options these days. You don’t have to go the traditional television route. Streaming services — Netflix, Amazon Prime — are creating amazing programming. So those are obvious choices for us. But at the same time our audience is basically us — guys who are middle-aged and still watch more conventional television — so we’re looking at both routes.” Trunk would love to end up on Showtime or HBO, where guests would be free to tell their crazy musician war-stories unedited. Florentine sees cable channel AXS, which already features music programming and is readily available, as a good fit.

…So what is it exactly about this loud music that moves its biggest proponent? “For me, it sounds crazy, but I’ll get like goose bumps when I hear a great guitar riff or a great vocal or just a great energy in the music,” Trunk says. “I’m 51 years old and I started in music industry right out of high school at 18, and I still get that same charge, whether it’s old or new music, when it really connects and moves me. I have a lot of friends that used to be into this music like I am and now they’re totally different. ‘Oh I don’t listen to that stuff anymore.’ It’s almost dismissive. I can’t understand that. To me that’s incomprehensible because once it’s in you, it’s in you. And to me it never left.”