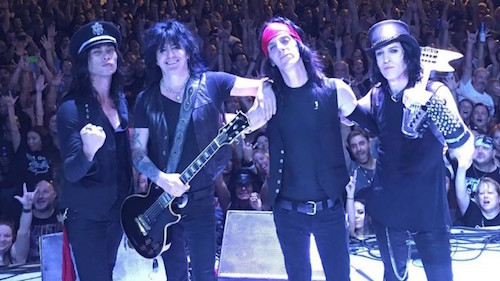 L.A. Guns frontman Phil Lewis has caused controversy by saying that “black people are all one-dimensional.”

The band were onstage at the Fish Head Cantina in Baltimore, Maryland, on April 22nd when he made the comment. The outburst came as he attempted to praise the life and music of Prince, who died aged 57 on April 21st.

Lewis recalled L.A. Guns’ early days, when they played First Avenue in Minneapolis – the club where much of Prince film Purple Rain was shot in 1984.

He told the crowd, “I remember when we were working on Cocked And Loaded, we were on tour, and they said there was a venue that we could play in Minnesota – First Avenue.

I didn’t know too much about it at the time, but after I saw the movie, I got it. We were all into that Prince, right? It was so cool, because you had your heavy s–t, and you had the pop s–t – and there was Prince doing his own f–king thing.

The problem is, right now – and I’m not gonna be a racist about it – but black people are all one-dimensional. We need more Princes.

We need less f–king rappers and more people like Prince. There, I said it.”

Lewis later moved to clarify his comments in a Facebook post which has since been removed, saying he was simply attempting to broaden the debate on rap music.

He told Metal Sludge, “It seems I have ruffled a few PC feathers with my onstage comment from Friday’s show. I stand by my words and make no apology for my observations. Perhaps “black media” would have been a better choice of words than “black people.”

“I was just thinking about the AA family who recently moved in the house next to mine. They’re all very nice but it’s obvious that they’re drinking the gangsta rap or hoops mentality Kool Aid – is that racist as well?

My solution has been to provide and teach the two 10 year olds basic guitar with the hope it will broaden their horizons as it did mine. Don’t expect there will be a new Prince anytime soon but damn sure there will be countless rappers spouting the “money and dos” moronic nonsense that does the black community no favors at all.”

He added, “I’m sure there are plenty of multi-dimensional brilliant musicians out there but not likely to hear about them on mainstream black media. Shame. More Princes, less rappers.”

L.A. Guns continue their tour in Buffalo tomorrow (April 26th) and head to Europe for a run of dates in May.