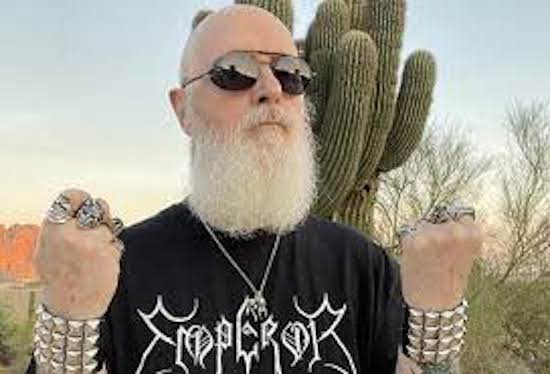 He recounts, ““I had my little cancer battle a year ago, which I got through and that’s in remission now, thank God. That happened while we were all locked down, so things happen for a reason as far as time sequence of events. I have nothing but gratitude to be at this point in my life, still doing what I love the most.”

While Halford hadn’t previously mentioned his cancer battle publicly, it turns out the details were revealed in the new chapter added to the just-released updated paperback edition of Halford’s 2020 memoir, Confess, in which he writes, with great specificity and some humor, about being diagnosed with and treated for prostate cancer during the spring of 2020, and again earlier this year.

The diagnosis, Halford writes, came after extensive testing that followed symptoms dating back to 2017. “How did I feel?” he writes. “I felt a combination of shock, horror, and oddly, relief — at least now I know!…’Am I going to die?’ It was all I could think of. I know blokes who’ve died of prostate cancer. ‘No, you’re not going to die, Rob,’ said Dr. Ali.” Halford chose prostatectomy surgery, which was successful on July 5th, 2020, to remove the cancer rather than radiation therapy.

The new chapter also reveals that more cancer on his prostate bed was found earlier this year, and that Halford went through radiation treatments during April and May, getting an all-clear in June just before he traveled to visit family in England. He also had an appendectomy after a tumor was discovered on his appendix.

“It’s been a draining year, I can’t deny it, but I’m delighted to have come through it,” Halford writes. “I feel like I’ve had the most thorough MOT that a Metal God can have.”

The 70-year-old Halford acknowledges that he had dark moments, especially right after the diagnosis. “I was getting proper mardy [British slang for sulky] and wallowing in my anger,” he writes, but adds that he got a “reality check” after watching a commercial for the Phoenix Children’s hospital. “It showed kids with cancer. Some only babies. They were lying there, with tubes coming out of them, fighting for their lives. They didn’t know what was going on…It made me feel totally ashamed of myself; Rob, how dare you be so selfish? And from that second, I change my entire mental attitude towards my disease.”

Halford further writes that he “told hardly anyone I had cancer,” save for his partner, Thomas, and family members. He had Priest management tell the other band members. In the new chapter, he urges male readers to have their prostate checked and promises he’ll be continuing to monitor his health through regular examinations and annual check-ups.

Judas Priest are celebrating their 50th anniversary with the just released the 50 Heavy Metal Years of Music box set out today (October 15th), and a tour, that had to be cut short due to guitarist Richie Faulkner suffering an aortic aneurysm, while onstage at the Louder Than Life Festival in Kentucky.

‹ VINCE NEIL TUMBLES ON THE “MOUNTAIN” AND BREAKS HIS RIBS