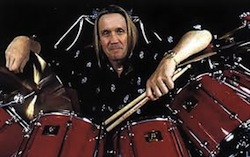 BPBNT:Would you like to weigh-in on the situations going on with Dave Lombardo and Bill Ward?

McBrain: I don’t so much about the Dave story… I was actually with Dave a couple of weeks ago in LA and he didn’t say anything. I don’t know much about the story, I take it there’s trouble in the Slayer camp?

BPBNT: Apparently he came to Kerry King regarding some financial discrepancies and they fired him.

McBrain: Oh, that’s not good! Yeah, you know, most of the issues that pro musicians have sooner or later in time boils down to the royalty check or performance royalties.

I’m sad to hear that that has happened, but, you know, when you find out and look at something and say “could you explain this to me, why we’re not getting what we should according to these numbers” and if somebody turns around and says “Fucking shut your face or you’re fired,” that therefore it tells you there’s an alarm bell going off. Without knowing all of the ins and outs of it, you can’t pre-judge it.

But yeah, the Bill Ward story, I understood that Sharon Osbourne got her fangs into that one. It’s beyond me — I mean, Bill Ward was the original freaking band member, you know? It just doesn’t make sense to me. If I was entitled to more, I don’t really want to know; I’m happy!

You have to ask yourself this: How did Dave Lombardo get the information that led to this problem, is what I’d like to know. Who gave him the financials, if he wasn’t on top of it with an accountant already?

I’m sad because Dave is so much a part of that band; he’s so identifiable. There’s great drummers out there, but Dave Lombardo is a master with it, and Dave is… to me, he is Slayer with Kerry and the guys! I think Kerry really may have overreacted and might be regretting it. I hope that that’s the case and they can sit down and sort it out.