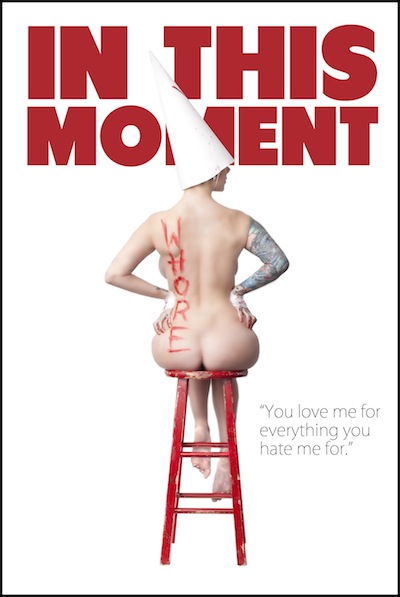 Southern California’s female fronted hard rockers, In This Moment, have just launched their latest single Whore to radio. The single is from the band’s latest Century Records release Blood.

The album was released in August of 2012 where it debuted at #15 on the Billboard Top 200 selling over 20,000 copies the first week. Blood marks the band’s highest chart debut of their career. While Whore has been getting traction at radio stations across the country, it was more important for the band to create a message that conveys the true intent behind the use of the word. Singer Maria Brink created the term Women Honoring One another Rising Eternally to give new meaning away from the derogatory connotation of the word.

“I am so proud and excited for the world to hear Whore!!!! This is an honest and raw movement that needs to be heard!!!!!!” exclaims singer Maria Brink. “The message behind this song is taking back control. It is about taking the power from a disgusting and degrading word and turning it back around on the accuser. It’s about self empowerment, love, and liberation.”

The imagery the band has created around the release of Whore is just as provocative as the word itself, yet all goes back to the important message the band has created. Singer Maria Brink explains, “I decided to pose nude for the visual art for Whore to evoke a raw vulnerable emotion. The word WHORE written down my back, and the dunce cap symbolize me placing myself on the stake for those who are suffering and I can only hope to encourage at least one person to find the self worth and love they deserve to transcend out of a painful situation into a beautiful one. It is about finding our power and taking a stand. We are resilient beings and need to realize our incredible strengths. I will not bow down to others perceptions of me; I will only rise in the name of art, love and music. “

Guitarist Chris Howorth adds, “One of the best things about the song Whore is all the feelings and thoughts that the word alone provokes and that’s great but at the end of the day it’s just a word, the only power it really has is the power that we give it. It’s really just about taking the power back from the word, and when you get past all the controversy of the word you have a bombastic rock and roll song with crushing guitars and huge drums that will have you screaming whore at the top of your lungs! Listen with your heart!”

In This Moment are returning to headline status this Fall hitting the road on the first-ever Hellpop Tour. The tour will also feature Motionless in White, Kyng, and All Hail The Yeti, in support. The tour begins October 24th in Tempe, AZ at the Marquee and runs through November 27th when it wraps up at Club Nokia in Los Angeles, CA. The 25 city trek will make stops in Houston, TX, Orlando, FL, Atlanta, GA and Salt Lake City, UT to name a few. In This Moment will also be playing a special Halloween show in Shreveport, LA on October 31st which will be a spectacle not to be missed. The band recently created a teaser video for HellPop which can be seen here. Tickets for all shows are currently on-sale.

In This Moment began in Los Angeles in 2005, when Brink and Howorth met at an open jam. Their debut album, Beautiful Tragedy, landed the band on the 2007 and 2008 editions of Ozzfest. Their first collaboration with Kevin Churko came with the release of 2008’s The Dream – earning them a slot on the 2009 Warped Tour. Their third album, A Star-Crossed Wasteland (2010) was their highest-charting album until the release of their latest album Blood (2012) took the distinction. The album was released last August where it debuted at #15 on the Billboard Top 200 selling over 20,000 copies the first week. Blood marks the band’s highest chart debut of their career. To date, the album has scanned over 185,000 units and has spawned the singles Blood and Adrenalize.