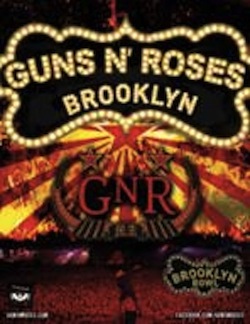 Iconic supergroup Guns N’ Roses have added another New York appearance this week with a performance at Brooklyn Bowl in Williamsburg, Brooklyn this Thursday, June 6th (doors: 8pm ET). The full-set will be followed by a late night after-party featuring GN’R keyboardist Chris Pitman as DJ. Presented by Brooklyn Bowl and Governors Ball, tickets for the 21-and-up event go on sale to the general public today, June 4th, at 7pm ET. Click here to order tickets.

The Brooklyn Bowl show is the continuation in a series of intimate performances over the past year including the Hiro Ballroom, their historic return to The Ritz (now Webster Hall), The Electric Factory in Philly, and House of Blues in various cities including L.A., Chicago, Houston and Dallas.

‹ 6/4: RECAP OF THE TMS NEWSTED PREMIERE