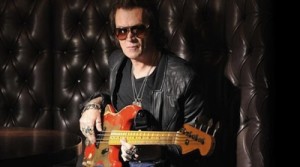 Rock and roll legend Glenn Hughes is rescheduling his recently announced US headline tour. The tour that was originally set to begin on March 2nd in San Jose, CA is now set to begin on August 9th in Annapolis, MD. The 64-year old icon recently underwent dual knee replacement last month and delays in the recovery from those operations are the reason for the reschedule of the tour.

“I am sorry to say that some recent setbacks in my recovery from knee operations are the reason that I can’t get out to see everyone as soon as I had hoped,” states Hughes. “I want to make sure I give my fans the best live experience possible and promise it will be worth the wait. I can’t wait to see everyone at the shows.”

The “Voice of Rock” will be performing a collection of music from his extensive career, including selections from Trapeze, Deep Purple, Hughes/Thrall, and Black Country Communion as well as his solo material. Backing Hughes on this incredible tour will be guitarist Søren Andersen and drummer Pontus Engborg. The tour will be making stops in cities such as New York, NY; Detroit, MI; and two shows in Chicago, IL before wrapping up at the legendary Whisky in Los Angeles, CA on September 3rd. More tour dates to be announced in the future. British blues songstress, Joanne Shaw Taylor, has been tapped to open the shows. Tickets are currently available and links to the rescheduled dates can be found on www.glennhughes.com. All tickets remain valid for the rescheduled dates and fans can reach out to their local promoters and venues with questions about the new dates. For questions regarding VIP Upgrade packages, please contact On The List Presents at [email protected]

Glenn Hughes will be inducted into the Rock and Roll Hall of Fame as part of the Mark III line up of Deep Purple on April 8th. He spent key years of his career as the beloved bassist and vocalist of the group, recording on the classic albums: Burn, Stormbringer, and Come Taste the Band. Hughes and other members of Deep Purple will be in attendance to receive the honor. This will mark the first time in 30 years that all the members have been in the same room together, some have never even met. Other inductees include Cheap Trick, Chicago, N.W.A, and Steve Miller. The ceremony will take place at the Barclay Center in Brooklyn, NY and will be recorded and broadcast via HBO at a later date.

Vocalist/bass guitarist/songwriter Glenn Hughes is a true original. No other rock musician has carved such a distinctive style blending the finest elements of hard rock, soul and funk. Stevie Wonder once called Hughes his favorite white singer. The first important band Hughes was a member of that achieved notable success was Trapeze. In 1973, Hughes joined Deep Purple. The trailblazing hard-rock legends had just weathered the departure of vocalist Ian Gillan and bass guitarist Roger Glover, but guitarist Ritchie Blackmore, keyboardist Jon Lord and drummer Ian Paice continued with the addition of Hughes and David Coverdale. Since 1992, Hughes has toured extensively in Europe, Japan and South America in support of solo albums, but more recently has been involved with award winning supergroups’, Black Country Communion with guitar star Joe Bonamassa, keyboard player Derek Sherinian (Dream Theater) and drummer Jason Bonham, son of the late Led Zeppelin legend John Bonham and California Breed, who also featured both Hughes and drummer Jason Bonham.

Glenn Hughes on the web: 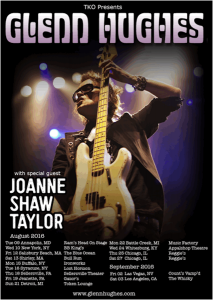