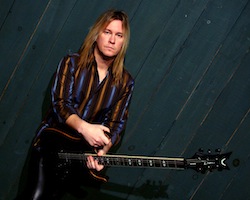 According to blabbermouth.net, former Megadeth and current King Diamond guitarist Glen Drover — who left the Geoff Tate’s version of Queensryche before ever playing a single show with the band — will join the Todd La Torre fronted Queensryche on stage this coming Thursday (March 7th) in Toronto, Ontario, Canada to perform the song Take Hold Of The Flame.

In a posting on his Twitter account, Drover tweeted, “Going up onstage with the REAL QUEENSRŸCHE and play Take Hold Of The Flame this thursday at the Phoenix in Toronto. Going to be fun stuff!”

Drover announced his departure from Geoff Tate’s version of Queensryche last November. He released a statement explaining, “I am really sorry to say that I have decided to bow out of Geoff Tate’s Queensryche. I was very excited about doing this gig initially, but learned in the past week or so that it’s in my best interest not to do this right now. I feel really bad for those who were excited about the idea, and to Geoff himself, who, I have to say, was very nice to me on my past trip to Seattle. I, of course, am very disappointed for arriving at this point, and making this decision, to say the least. I sincerely wish the Geoff and the band all the luck on what they do in the future.” 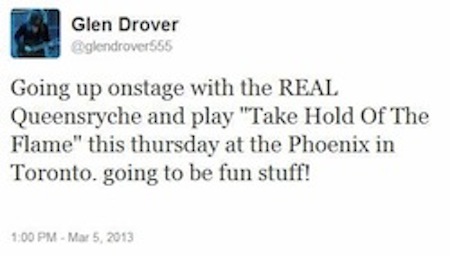