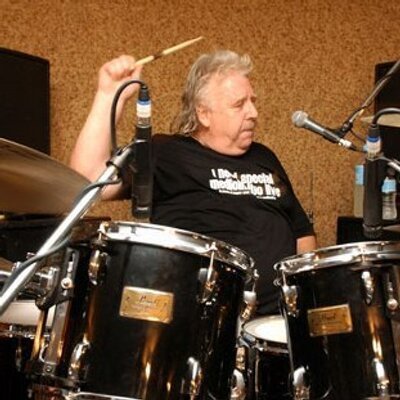 Greg Prato of Bravewords spoke with former Ozzy Osbourne and Uriah Heep drummer, Lee Kerslake, about his health and a pair of upcoming projects – a solo album and a documentary of his life and career.  Highlights from the interview appear below.

BraveWords: How are you doing health-wise?

Lee Kerslake: I’ve got spinal cancer and prostate cancer – I’ve got it in remission at the moment. But I’ve also got psoriatic arthritis and osteoarthritis that’s really hurting me and really painful. And I just had two stints put in for my kidneys – to go to the toilet properly….I was in so much pain. I never want that feeling again.

BraveWords: Are you are feeling better now?

Lee Kerslake: Well, I am now with the new stints in. I just bought myself an electronic drum kit, and I’m playing again, because I want to do two more shows with Uriah Heep – that’s on my bucket list. Even Ken Hensley, the sole writer of July Morning – well, he said he was – said I’m the only drummer that ever played that right with feeling. So, that’s another honor. I’m well chuffed – people like my drumming. The thing was with Ozzy, everybody went through the roof with my drumming on that. Man, the fans I suddenly gathered. And when I was diagnosed with cancer and going to the hospital for weeks and weeks, I had 30,000 get wells. How about that? I’m so honored by that. I will never ever forget my fans – because they helped put me there, by buying my records and listening to the songs that I’d written. I’m well chuffed.

BraveWords: Will there be special guests appearing on your solo album?

Lee Kerslake: No. I look at a solo album as a solo album. I have two major people – the engineer, and also, the guitarist who did the bass, high vocals, and lead guitar. He’s a genius – he’s like Randy Rhoads. Unbelievable. His name is Jake Libretto. You’re going to hear about him – he’s unbelievable. He puts Jake E. Lee and Zakk Wylde…he can bury them. He can play like Jeff Beck, Randy Rhoads, and his own style. It’s beautiful.

BraveWords: And there is also a documentary being made about your life and career, entitled Not On The Heep (more info here).

Lee Kerslake: Yes there is. But I can’t say anything about that, because we’re waiting again on the release date. It’s been a lot of fun – it’s brought back a lot of memories for me. Going back home to my hometown and seeing where we used to go on the beach. Where I lived in my youth, I was on the beach nearly every day, so we did a lot of filming of that. And we filmed good friends of mine, KISS. Gene and Paul I’ve known for 50 odd years. I allowed them to come onstage with their whole stageshow [when KISS opened for Uriah Heep early in their career] – “You do your thing, you’re not going to affect us. The people that came here love us, but you will get more people if you do your stage thing.” They did the whole thing, and they came in and thanked us. And I stayed friends with Paul and Gene, and later, it turned around the other way and we were supporting them. I used to go with them to dinner in New York. We got on really well – I really enjoyed them.

BraveWords: What do the two Ozzy albums [Blizzard of Ozzy and Diary of A Madman] that you played on mean to you today?

Lee Kerslake: I had left Uriah Heep because I was fed up with the management. Management drove me mad and I hated them. So, I left. I went down to Shepperton – a friend of mine’s studio…do you remember Go West? Pete Cox was another good mate of mine, who was also with Manfred Mann, and he had a studio. So, we got together, and I had Pete Cox singing songs that I was writing. And lo and behold I get a phone call from Ossie Hoppe from Germany, and he says, “Ozzy Osbourne is asking to get in touch with you. He wants to know if you can join his band?” I said, “No. I’m not joining any band. I’ll be part of a band…but I’m not joining to be a member of a band.” He said, “No – all four of you will be straight down the middle. What’s going to happen is we’re going to get a studio in Shepperton, and you’re going to come down there, set up your kit, play a couple of tracks, and take it from there.” I said “OK.” I knew Bob Daisley was going to be in the band. They’d started recording, and they were using any drummers they could get their hands on – and they were bloody awful. Believe me, they were awful. So, I phoned Bob, and said, “What songs are you using?” And over the phone he told me the idea and he played me the idea of Crazy Train and I Don’t Know. And I went, “OK. I got it.” So, the day came that I went into the studio rehearsal, and I went, ‘One, two, three, four…’ [sings beginning of Crazy Train]. We did all of that, I started playing heavy, and Randy Rhoads jumped up in the air, and said, “We’ve got ourselves a f–ing drummer.’ And that was it – I was in. And I co-wrote the second album. But I did a lot of work with the drums to get it right with the style of the first one, Blizzard of Ozz. And then we did Diary of a Madman, which I thought was an amazing album. And so did a lot of people – those two albums together sold over 70-odd million, and they’re still selling.

BraveWords: How is your relationship with Ozzy currently?

Lee Kerslake: I tried to send a message to him because of his illness. I think it’s so sad what he’s got. I spoke to his secretary that Sharon’s got – they passed a message on, and I never heard a thing. I’m going to send a message again – I’m not going to quit yet. I want to give him my love. All the things we did, we made him a star again, and he deserved it. I’m not angry about anything. I think the world of him – I like him, and I always will. I think he doesn’t get in touch with me because I don’t know if he can remember me – I don’t know how far he is in the senile-dementia with the Parkinsons. That’s terrible. We’re all getting old and we’re all suffering different things. I’m just about keeping my head on straight…and it’s not easy. But I’m trying to get in touch with Oz, and to give him my love and my sorrow for what he’s got. He doesn’t deserve that, because that means he won’t be touring and won’t be playing anymore, and I thought, “Oh, I would have loved to have done one more gig.” But that’s the way it is.

BraveWords: Is it true that [guitarist] Randy Rhoads was a big fan of [Uriah Heep’s] Demons and Wizards album?

Lee Kerslake: Yes, he was. He loved the way the style of the music, the way it turned and the way it went. And that’s why when he came up with the idea of a riff – me, Bob, and Randy – we wrote Diary of a Madman. It was such a strong song on the album.

BraveWords: Do you have a message you’d like to say to your fans?

Lee Kerslake: Please, please, please give big love, a kiss, and affection to all my fans in America. I know I’m not well and struggling with touring, but I’ve got to get over there and play a few gigs. I owe it to them – I owe it to my fans, to get off my ass and play.