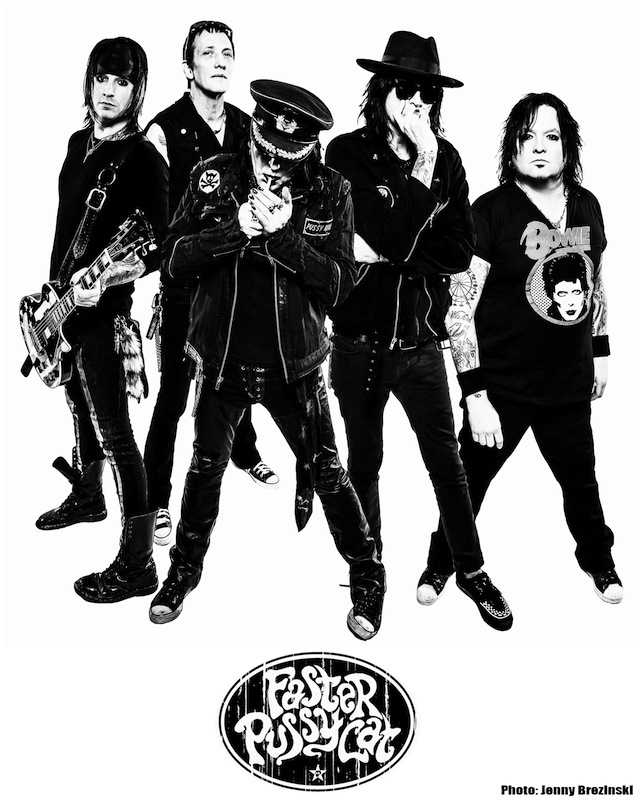 For years Faster Pussycat‘s aggressive touring schedule had made it difficult for them to get into the studio to work on new material, when the Covid pandemic hit, and there were no live shows for the foreseeable future, the band immediately shifted gears and entered the studio to work on new music, and it is now time for that music to see the light of day – the band’s first new offering since 2006.

The new single NOLA is a song inspired by the fabulous city of New Orleans, a city that fronman Taime Downe holds dear to his heart. When the band started working on making new music for a release NOLA was the obvious choice to lead with. Downe and guitarist Sam Bam Koltun began working together in the studio, tracking guitars on what would be the first new song from the band since 2006’s The Power And The Glory Hole.

The B Side of the single is Pirate Love a cover of the Johnny Thunders & The Heartbreakers song, which was goes back to Faster Pussycat’s club days, also Inspired by the New Orleans theme, as Thunders passed away in New Orleans in 1991, and has had a major influence on Downe and the whole band.

The single will be released on May 21st in two formats- Digital and a 7” vinyl single. Digital will be available through Apple Music, Spotify, Amazon etc.. The vinyl will be available exclusively through the band’s website: fasterpussycat.com.

o celebrate the release Faster Pussycat and Enuff Z’ Nuff are pairing up and coming Straight Outta Quarantine  throughout North America –  showing all the warts, scars and tattoos that only a package like this can, which have only grown deeper over the past year.

Featuring the MTV smash hits House Of Pain, New Thing, Bathroom Wall and Fly High Michelle the Straight Outta Quarantine tour, (which has been booked and routed with careful consideration of each venue’s Covid regulations and the safety of all involved) is without question going to be one of the most long overdue rock and roll parties of our lifetime.

‹ IN CELEBRATION OF THE BAND’S 40TH ANNIVERSARY, MÖTLEY CRÜE WILL RELEASE A SPECIAL REMASTERED DIGITAL EDITION OF “GIRLS, GIRLS, GIRLS” ON JUNE 11TH