EDDIE VAN HALEN ON HIS GUITAR COLLECTION: “THERE IS ALWAYS SOMETHING NEW FOR ME AROUND THE CORNER”

Eddie Van Halen is featured in the January/February 2014 issue of Guitar Aficionado magazine where he discusses his guitar collection. An excerpt from the feature story, by Chris Gill, appears below.

Most guitarists and fans who have paid close attention to Eddie Van Halen’s career likely think of him as a “serial monogamist” when it comes to the guitars he plays. During the early days of Van Halen, he was known for playing his Frankenstein guitar that he assembled from various parts, and during the Eighties he was usually spotted onstage with his trademark Kramer 5150 guitar.

After that, Ed went through a succession of signature-model guitars that he designed that were built by Music Man and Peavey. Those guitars led to the ultimate solution—establishing his own EVH brand, which produces various guitars, 5150 amplifiers, cables, accessories, and other products entirely to Ed’s own specifications, including the Wolfgang model guitars that are his main workhorse instruments today.

However, over the years Ed has amassed quite an impressive and deep collection of many other guitars that have played important, behind-the-scenes roles in Van Halen’s music. Some of these guitars inspired new songs, while others made cameo appearances during solos or overdubs recorded in the studio. Then there are several gifts given to Ed, particularly the various guitars that his mentor Les Paul gave to him over the years. And like anyone who has played guitar for a while, Ed has made a handful of impulse purchases, picking up instruments that catch his eye if only for their aesthetic appeal.

The storage space at 5150 studios where Van Halen keeps his gear makes Guitar Center’s Hollywood flagship location look like a humble mom and pop store. Boxes marked with the EVH brand logo are stacked neatly near the entrance, and row upon row of old, battered guitar cases line the walls, concealing their mysterious and alluring contents. As Matt Bruck, Van Halen’s business partner and our tour guide for the day, asks if there are any guitars we’d like to see, our minds are immediately flooded with recollections of rare or obscure guitars that Van Halen has mentioned in past interviews or that we caught fleeting glimpses of in old concert photos. Most of those instruments are still around, but even more fascinating are the guitars that we never knew Van Halen had.

“I’m not the typical guitar collector in the least,” Van Halen says as he goes through the stacks and pulls out a few of his personal favorites. “I’ve bought a lot of vintage pieces over the years, but I’ve destroyed quite a few of them. People might think, How could you desecrate the Mona Lisa? but I really don’t care what something looks like. I’m more concerned with a guitar’s functionality, sound, and playability. That’s why I started building my own guitars. Other guitars wouldn’t do what I needed them to do, so I made my own.”

Van Halen is not exaggerating. As the photos on the following pages show, he has no qualms about performing rather drastic surgery on instruments to achieve the sound or performance he desires. Vintage purists may want to look away, but the various scars, marks, and modifications that he’s made even on valuable vintage instruments tell the tale of a man who is constantly looking for ways to improve the tools of his trade and who refuses to accept the commonly held belief that all progress in electric guitar design stopped in 1959. That attitude resulted in a treasure trove of innovations that Van Halen either invented or inspired, including the hybrid Super Strat design (with PAF humbuckers instead of single-coil pickups), customized high-gain amps, bold graphic finishes, and other developments that most of today’s guitarists take for granted.

“There is always something new for me around the corner,” Van Halen says. “My tastes are always changing. I used a Wolfgang Stealth with an ebony fingerboard on our entire 2012 tour. Before that, my main guitars all had maple fingerboards, but one day I tried a guitar with an ebony board and thought that it felt pretty good. For the 2012¬–13 tour, I modified my 5150 III amp heads because my taste had changed again a little and I wanted to continue the evolution of the amp. We’re putting out the limited-edition 5150 III S with that mod, for anyone who wants what I am currently using. I just keep pushing to see what I can get out of something. Spinal Tap made a joke about things going to 11, but I’ve spent my whole life pushing things to 11.”

What trips me out about this guitar is that when I painted it red, that made it more famous. A lot of people still don’t know that it’s the same guitar as the black-and-white guitar on the cover of the first Van Halen album. That guitar went through a lot of different phases and changes. On the first record, it had a stock vintage Fender Strat vibrato, then the Floyd came around, and then I added the dummy pickup at the neck. I kept changing it because I was tired of people copying my guitar.

For the rest of this story, please visit the Guitar Aficionado store to purchase a copy. 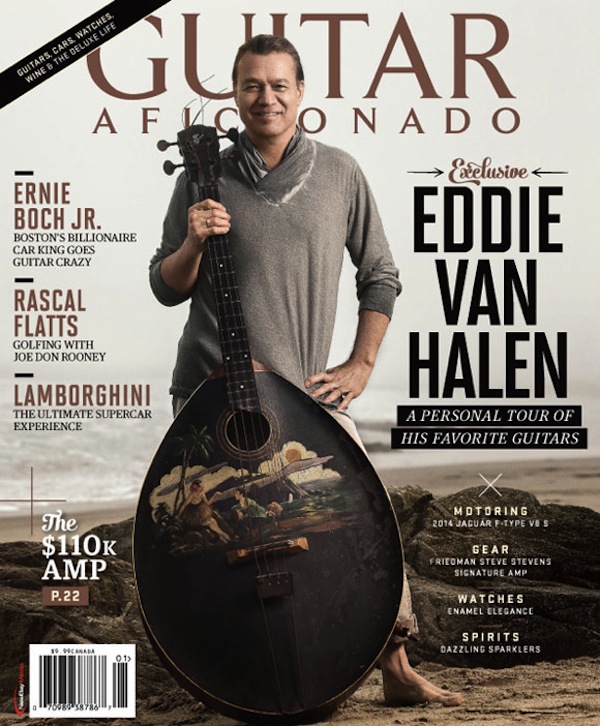