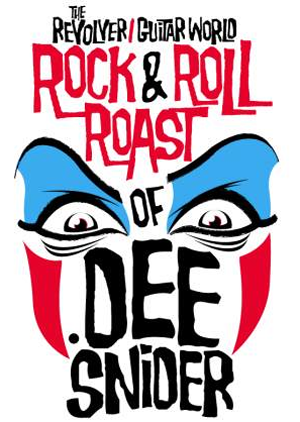 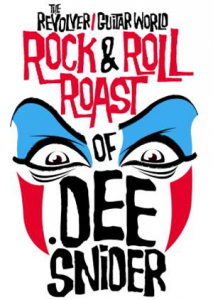 This year’s honoree is none other than Dee Snider, who was recently named one of the 100 greatest living rock stars by Revolver magazine.

The event, which is sponsored by Epiphone and Monster Energy Drink, will take place at The Grove in Anaheim, California, January 24 during 2013 Winter NAMM weekend. However, unlike the rest of NAMM, the Roast is open to the public, and it also will air live on AXS TV at midnight ET (9 p.m. PT).

A portion of the proceeds will benefit MusiCares, a nonprofit organization of The Recording Academy that provides emergency financial assistance and addiction recovery resources to music people in need.

Roastmaster Penn Jillette and other metal-loving luminaries such as last year’s honoree Zakk Wylde, Anthrax’s Scott Ian, Lita Ford, WWE legend Mick Foley and That Metal Show host Eddie Trunk, plus comedy and roast veterans Jim Norton, Craig Gass, Jim Florentine and others will take aim at the Twisted Sister frontman and reality TV icon, best known for his outspoken personality, golden locks and appearances on The Celebrity Apprentice. Jose Mangin (of Sirius/XM and Headbanger’s Ball fame) will be on hand to serve as the evening’s DJ.

Says Rock & Roll Roast Executive Producer Josh Bernstein: “They say you only roast the ones you love, but with Dee Snider, we’ll be making an exception.”

Never setting his limits, Snider has taken on the role of film producer, actor, voiceover artist, political advocate and, most recently, Broadway star with his run in the hit musical Rock of Ages. His autobiography, Shut Up and Give Me the Mic, was released in the summer of 2012, and Dee returns to the small screen in March 2013 as part of the cast of All-Star Celebrity Apprentice.

AXS TV Concerts can be found online at www.axs.tv, on Facebook at facebook.com/axstvconcerts and on Twitter at twitter.com/axstv.

Check out the commercial for the roast below.

‹ ANTHRAX’S “ANTHEMS” EP TO BE RELEASED ON MARCH 19TH